For many years – actually for a couple of decades – I have used a “talent test” to gauge the strength of very young players. It consists of just six pieces and is easy to dictate: “wKd8, Pb5, h2; bKa7, Pa6, b7; White to play and win”. Naturally it has to be solved without pieces, all in your mind. A couple of my young victims went on to become top grandmasters, or in fact World Champions. Some of the adventures I have more recently had with the talent test are described in this article, which also has a video of me describing earlier experiences (e.g. with the young Garry Kasparov).

I’m afraid, however, that my classical talent test has reached the end of its lifespan. I have written about it, and the super-talents I tested could not wait to show the puzzle to their friends. So in the future when I meet a budding young player and say: “I want to give you a puzzle to solve…” they will answer: “You mean the 1.b6+ talent test?” Well, it has served me nicely for more than thirty years…

But new super-talents keep coming, and I need a quick test to assess their level of skill. So I started using one of the most famous studies of all time. Before I embark on the narrative, I want you to join me in a small experiment. The result will play a role in the story that follows. 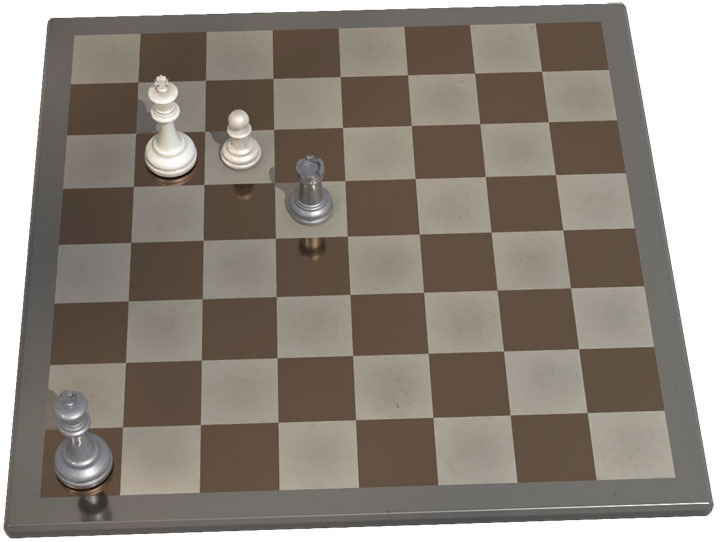 Please take a look at the above position – it is White to play (moving up the board) and win. Chances are you already know the study, but if you don’t, please don’t scroll down. Try to solve the problem in your mind, by just looking at the 3D-board above.

You will probably instantly see that White must start with 1.c7, since any king move allows 1…Rc5, after which the pawn is lost. The question is how you can progress after 1.c7 Rd6+? White clearly cannot play 2.Kb7. If he does, then Black will play 2…Rd7, pinning the pawn and capturing it on the next move. So how does White proceed?

Now I want your brain to leap into action: by just looking at the board above, can you figure out a clear path to victory for White? You have to work out a strategy that is six moves long (and ends with a wonderful subtly). The question is: can you see all the intricacies  – including why only one very specific line works – by just looking at the board? Or follow the solution, which I will now give?

Your mental thought process must be as follows: 2.Ka7 is just as bad as 2.Kb7. Black simply pins the c7 pawn and captures it on the next move. So White must clearly move the king downwards. 2.Ka5?? is insane: Black actually wins, after 2…Rc6 and 3…Rxc7.

But here comes a black defence that most people, solving in their heads, will miss. A number of chess engines miss it as well, in the look-ahead in the initial position. The defence is 5…Rd4! Now if 5.c8Q then 5…Rc4+, and when the queen captures the rook it is stalemate!

Were you able to follow the entire solution in your head? If you have trouble doing it, try moving the pieces on our live diagram board:

The above position was taken from a study published in 1908 in the Deutsche Schachzeitung by the remarkable Platov brothers, Vassily and Mikhail Nikolaevich. They composed hundreds of similar works and are considered, with Rinck and Troitzky, the founders of the modern endgame study. I will now give you the full study, which you can solve with an enhanced feature of our live diagrams:

Here you can use a recent enhancement to our live diagrams: click on the fan button below the board to switch on a chess engine. It will analyse with you and help you find the solution. Note that the + and – buttons to the right of the engine window that appears display more or less lines, while the “!” button (my personal favourite) tells you what a move is threatening. Of course, you might want to first try and solve the study on your own, or without switching on the engine. Maybe even in your head?!

And now to first results with my experiment: I dictated the position shown in the first diagram to about a dozen candidates. All amateurs didn’t have a chance of solving it in their minds. The mid-teens with full GM titles who did not know the position,  struggled for a while, but worked out all the complexities, with a little prompting from me, in an average of ten minutes.  A majority, however, knew the study (GM Leon Mendonca: “Fred, I have known it since I was five!”).

One interesting candidate was Tykhon Cherniaiev. On an adventure playground I called the 12-year-old and started dictating the position: “So there is a black king on a1, a white king on b6, white pawn on c7…” Before I could finish the lad exclaimed: “Yes, I know it: White plays c7, the rook…” (which I had not yet mentioned) “…checks, the king goes to c2 and then underpromotes!” This kid must have thousands of studies in his mind.

And another interesting candidate: John Nunn. When I dictated the study to him he was a bit taken aback. Was I serious? Instead of giving me the solution, he started telling me the historical background of the study.

But then a Spanish priest. Fernando Saavedra, who lived in Glasgow, pointed out that White could win with the underpromotion given above. That single move made Saavedra, who was not a strong player, one of the best-known figures in chess. Mention his name to any chess enthusiasts, and chances are that they will know who he is. More likely than Zukertort or Kieseritzky. 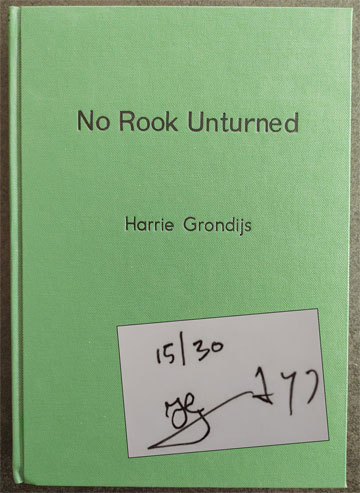 So how was John able to extemporize this explanation. Well, it turns out he is the proud owner of a chess book solely devoted to this subject:

No Rook Unturned – A Tour Around the Saavedra Study,  written in 2004 by Harrie Grondijs.

It is 361 pages long and entirely devoted to the Saavedra position and the personalities connected to it.

The first edition consisted of 30 copies, and John bought number 15 (with an autograph of the author). There was a later second edition, also of 30 copies.

About this book John says: “It’s beautifully produced and full of meticulous research.”

And here is the full solution to the Platov study. Note that you can click on the moves of the notation to get a replay on the side, where you can follow the lines given.

Understanding before Moving 83: Basics of the Benko Gambit (2)

Where Are They Now? 8 OG Sexbomb Dancers Then and Now

Where Are They Now? 8 OG Sexbomb Dancers Then and Now

How to Bet on the Super Bowl in NV