In this two-volume video course, former world champion and star coach Rustam Kasimdzhanov puts together a complete French repertoire for the black pieces, drawing on his many years of experience both as a top player and as a second to Anand and Caruana.

In a total of almost eleven hours of video — volume 1 runs for five hours, volume 2 for almost six — Kasimdzhanov presents his repertoire in his usual detailed and expert manner. I was very curious to see what Kasimdzhanov’s recommendations were, as there have been a number of really good French repertoires in the recent as well as older past. From ChessBase alone there are really worthwhile repertoires by IM Berger and GMs King, Pähtz and Pert.

Of course, Kasimdzhanov shines with a variety of fresh creative ideas that contain little, if any, overlap with the aforementioned previous works.

Let’s look directly into the contents of the first volume and the heart of it, namely the question of what does Kasimdzhanov recommend against 3.Nc3.

The former world champion goes for 1.e4 e6 2.d4 d5 3.Nc3 Nf6. This so-called classical system has seen an enormous surge in popularity in the last two decades and has clearly outstripped the Winawer with 3…Bb4, which is looked at deeply in Pert’s FritzTrainer. 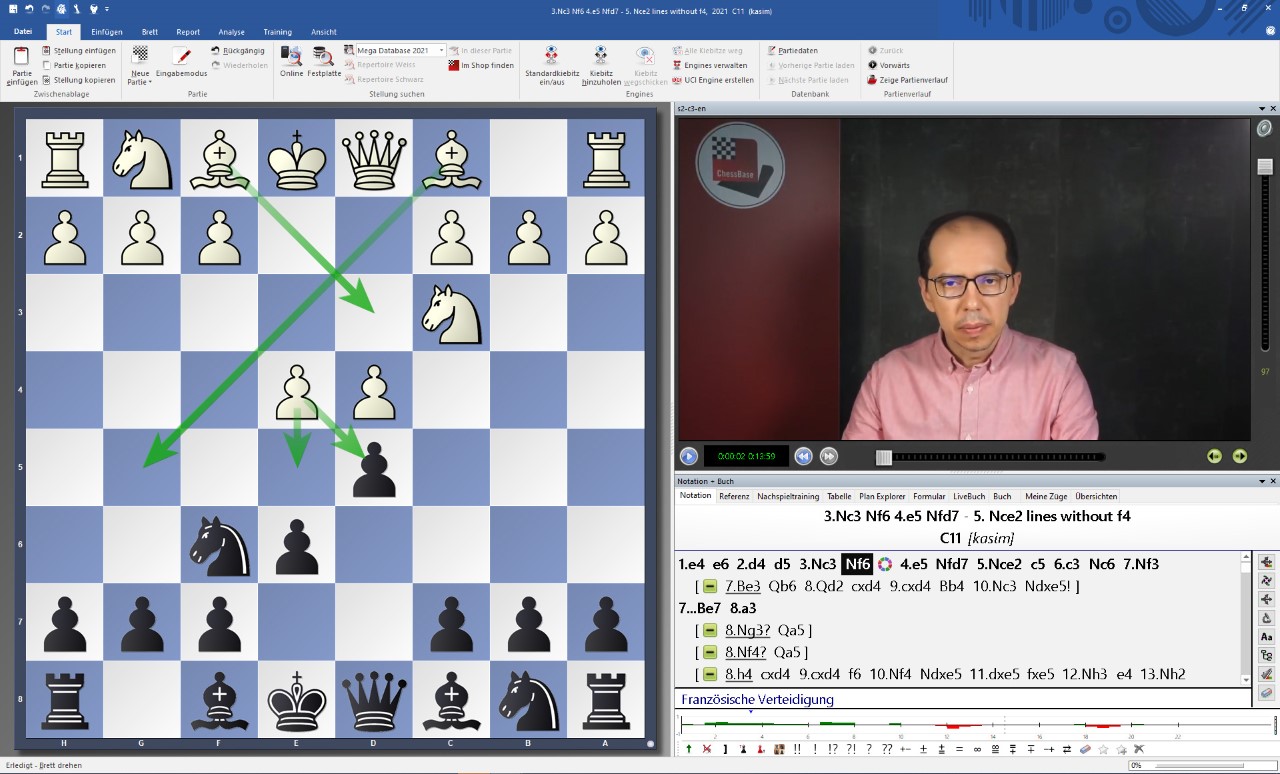 On the basis of three sample games by Morozevich, the newly crowned European Champion Matthias Blübaum and the long-time French connoisseur Georg Meier, Kasimdzhanov gives a first him of his deep knowledge about the French and impressively shows the counterattacking potential of the Defence — or should we rather call it a counterattack? After that, one almost wants to plunge into the subsequent theory chapters, which I would like to roughly outline here in brief.

The first part deals intensively with 4.e5 Nfd7 5.Nce2!?, and then the variation with 5…c5 6.c3 Nc6 with and without f4. Then we come to the heart of the variation, which is characterized by the pawn-stealing variation 4.e5 Nfd7 5.f4 c5 6.Nf3 Nc6 7.Be3 cxd4 8.Nxd4 Qb6!? This variation carries some risk for both White and Black and is therefore the ideal choice if you need to win and want a sharp game.

The explanations by the former world champion in this complex and sharp variation are precise and comprehensible, but in my opinion require a playing strength of at least 1850 DWZ.

Even more interesting for me was the part dealing with the continuation 1.e4 e6 2.d4 d5 3.Nc3 Nf6 4.Bg5, which — presumably for reasons related to chess fashion — is nowadays much less frequently encountered than 4.e5.

Kasimdzhanov surprised me in a very positive way by opting for the rarer variation with 4…dxe4 5.Nxe4 Be7!? — IM Steve Berger’s FritzTrainer dealt with the, in my opinion, underestimated 5…Nbd7 at this point, so there is no overlap here either.

In the main variation after 6.Bxf6, Kasimdzhanov’s choice was 6…gxf6!?, previously favoured by Morozevich, with which Black secures the bishop pair and the half-open g-file, and undoubtedly also signals his ambitions to win. How Black should treat the emerging structures is presented very comprehensibly and explained in detail.

Especially worth mentioning: for those who find the positions arising after 4…dxe4 5.Nxe4 Be7 too theory-heavy or complex, Kasimdzhanov offers an extremely interesting, but theory-poor alternative in the form of the surprising 1.e4 e6 2.d4 d5 3.Nc3 Nf6 4.Bg5 h6!

This variation, which I first saw in volume 4 of Jeroen Bosch’s Secrets of opening surprises series in a 2006 article called Alekhine’s blunder by Igor Glek and Elena Sedina, fascinated me even then. I played the variation in various blitz games and with quite good results, and was thrilled to see that even GM Blübaum played this variation at least eight times, once to defeat the strong GM Demchenko. Kasimdzhanov has finely polished this game with his own and engine analyses.

As can be seen, especially in the main variations, there is hardly any overlap with IM Steve Berger’s inspiring French course at ChessBase, which is thus an ideal complement to Kasimdzhanov’s work.

The second volume deals with all the other variations. Here of course the Tarrasch Variation after 3.Nd2 and the Advance Variation with 3.e5 are in the foreground.

His decision to answer the equally typical and inconspicuous move 6.a3 with …Nh6! particularly pleased me and therefore represents an excellent choice in my opinion.

This move to the edge of the board was first played by Moskalenko, Velimirovic, Dokhoian and Barsov in the late 1980s, but it only became particularly popular with John Watson’s Play the French (4th edition). Its quality is confirmed by the fact that today it is chosen especially by Nakamura, Vitiugov, Bareev, Howell, Shirov, Meier and Ponomariov.

In detail, the variations…

…are treated, and Kasimdzhanov repeatedly proves good counterplay for Black.

Kasimdzhanov also came up with a surprise in the Tarrasch Variation!

A quick check of the variation showed that 10…Be7 had already been used by Pietzsch, Uhlmann, Petrosian, Vaganian, Mestel and even Spassky in the 70s to 80s. Its practitioners today include, for example, MVL, Nakamura, Ding, Blübaum, Andreikin, and Salem — it hardly gets any better than that!  Early variations in the Tarrasch French, such as 4.Ngf3 cxd4 5.Nxd4 Nf6, can be found in the concluding chapter of this variation.

Here you can find input on such side variations as 2. b3, 2.Nc3, 2.f4 or the King’s Indian Attack. If I have looked correctly, the only omission of the FritzTrainer can be found here, in that Kasimdzhanov omits 2.Nf3 d5 3.e5 which might continue with 3…c5 4. b4!?. It would have been exciting to see which move he intended to give Black here.

I was always impressed by Kasimdzhanov’s conscientiousness. The interactive training test including video feedback, which is part of the ChessBase standard, rounds off the course, as does the training using ChessBase apps and the concrete testing of the opening repertoire.

Conclusion: “The French is a wonderful opening” was once said by IM John Watson. And how could I contradict this assessment after studying these two impressive FritzTrainers by Kasimdzhanov?

Robert Ris’ Fast and Furious: A Gambit against the Sicilian Alapin

How companies — and employees — can avoid a burnout crisis