On to the quarterfinals

The new format used in the Meltwater Champions Chess Tour has proven to make for an exciting preliminary stage and a more quick-paced — and entertaining — ­knockout. At the Chessable Masters, the fourth leg of this year’s tour, three 2700+ rated players (according to their tour ratings) did not move on to the second stage, as Jorden van Foreest, Vidit Gujrathi and Nils Gradelius were all eliminated in the prelims.

This Najdorf-DVD is suited for the beginner as well as experienced club players. Pelletier presents a classical repertoire that’s easy to learn and covers all you need to know about the Najdorf.

On the other hand, the one player rated below 2700 who did advance to the quarterfinals was Aryan Tari. The 22-year-old lost three games in the first six rounds, but four consecutive wins in rounds 10-13 allowed him to bounce back and eventually get eighth place in the final standings table.

In the first round of the knockout, Tari will face Anish Giri, who won the prelims after collecting seven wins and eight draws in an impressive undefeated run. Giri outscored world champion Magnus Carlsen by a single point and is set to face Tari in the quarterfinals — Carlsen will play Spain’s David Anton.

The remaining two pairings in Monday’s matches will be Ding Liren vs Shakhriyar Mamedyarov and Wei Yi vs Praggnanandhaa. 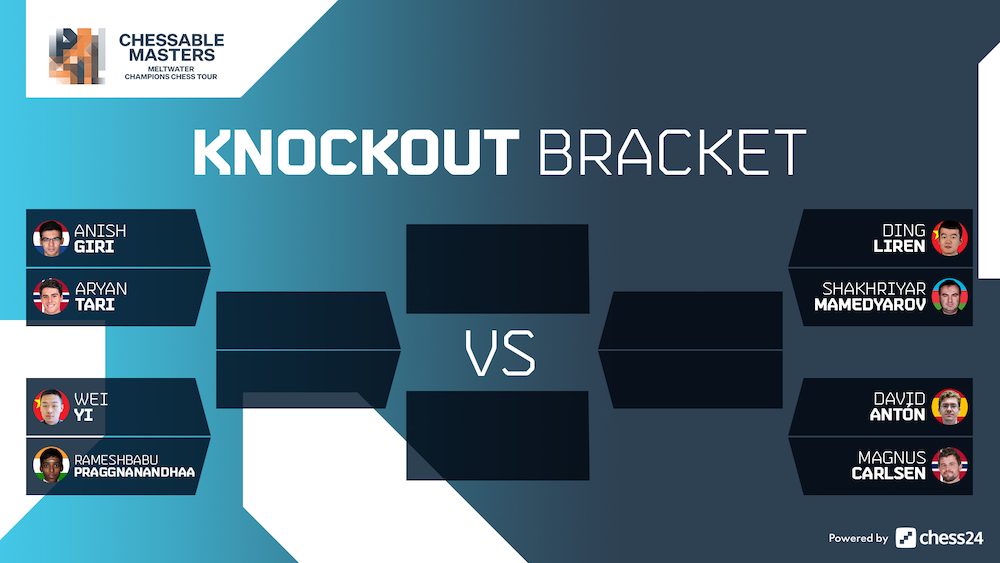 In an exciting round-13 matchup, Giri defeated former leader Wei with the black pieces. Out of a Najdorf Sicilian, the two tactical whizzes created strong attacks on opposite flanks. A single imprecision is all it takes to tip the balance in such sharp positions.

As the variation mentioned above shows, it all comes down to a single tempo, and in the game there was only one move that kept the balance for White: 30.gxf7+, when after 30…Kg7, any move other than 31.Qg3 loses. A difficult line to find in a rapid game, indeed!

Moreover, Wei had to calculate the consequence of several alternatives, including the ones following 30.gxh6, the move he chose in the game. Giri, who has been in great form throughout the event, quickly replied with 30…fxg6 31.Qg3 Kh8

The Dutchman knew that he only needed a tempo to begin his unstoppable attack. Wei resigned in the diagrammed position, as there is no way to deal with all the threats surrounding his king. For example:

In another tactical skirmish from the same round, Tari — much like Giri — stopped Vidit’s attack on the kingside and went on to win the game with the black pieces.

Vidit here put both his knights en prise with 24.Nh5, taking advantage of the fact that …gxh5 loses on the spot to Qh7#. However, Black has the counter-sacrifice 24…Nc3+, when 25.bxc3 allows a quick mate.

The Indian continued fighting with 25.Rxc3 bxc3 26.Nf6+, but it turned out that White has everything under control on the kingside after 26…Kg7

White was forced to defend with 27.Qc2, but now Black can safely capture the knight with 27…hxg5 and is simply a rook up. Tari forced further simplifications and collected the full three points (a football scoring system was in place) seven moves later.