Cooks and finds with 8-piece tablebases


The value of 8-piece tablebases

It would be easy to dismiss the interest and point of 8-piece tablebases in view of the powerful engines available together with 6-piece or 7-piece tablebases. But it really is not as simple as it sounds. Most people today do not have a complete 7-piece set at home, still requiring a hefty 18.4 TB, and while you can consult it online, the engine won’t be using it to render judgement should you do so. However, even with a properly powerful setup, and a ‘mere’ 6-piece set, it will be unable to give you that absolute-ism you so desire in a position.

Consider the following position and analysis shared by Marc Bourzutschky, the producer of the 8-piece tablebases and analysis.

In this position, taken from a game in the 1998 World Under-18 Championship, Black had a mate in … 370 moves. Naturally, he had no way of knowing this, and even the 6-piece set was not publicly available, much less the 8-piece set that this requires. Black’s only winning move here is 51… ♜a2!

So what does a strong engine using 6-piece tablebases say? The good news is that after a minute on a modern laptop with 16 threads, the engine does indeed choose the best play 51… ♜a2! Yay. The bad news is that even with all gears turning at full speed, it is only able to evaluate Black as slightly better.

A player analyzing without the benefit of a larger tablebase set may be led to believe there is no win, and the engine is doing that funny dance where it shuffles around the board for the next 100 moves before coming to terms with reality. Yet it is winning as we know.

In his interview (see below) and email to ARVES, Marc Bourzutschky explained that two reasons motivated his research into positions with opposing pawns. 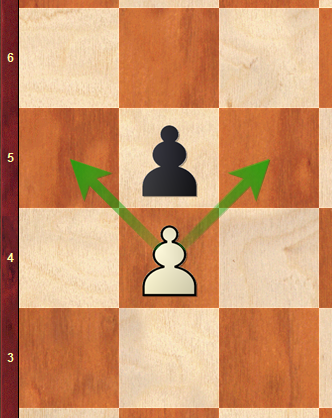 The first is that by its very nature, the only way one of the pawns will free itself of the blockade is by capturing an enemy piece, and in so doing, this would mean one piece less and therefore a 7-piece endgame for which a ready solution is available. In computation terms, this meant a huge savings in time and space.

An example can be found in the 1990 World Championship match between Kasparov and Karpov:

The position is indeed winning for White, and Kasparov accounted very well for himself by converting it in under 40 moves.

The second reason is that a survey of positions found in databases showed that such endgames with a pair of blocked pawns represented as much as 50% of practical positions seen in play. A wonderful payoff when you consider that together with the pawnless endgames, they took up only 70 TB of space, while the complete 8-piece tablebases are expected to exceed 700 TB.

Looking at some of the positions and solutions, one is left with a strange feeling. A feeling not of inadequacy, but rather of how astonishingly rich chess is even in its paths to victory. Consider this next position:

The aim of this DVD is to provide you with the practical skills and knowledge that you will need to play a rook and pawn endgame. Based on his own playing experience, Grandmaster Daniel King reveals what is essential knowledge, saving you time in your studies. The Power Play series is suitable for anyone looking to improve their chess, but also provides ready-made lessons and exercises for a trainer.
Running time: 5 hours

If you are told that it is a tablebase win for White, it won’t come as a complete shock. White’s pawn is on f6, just a couple of squares away from promotion, and is up an exchange as well. You might try to imagine how that win might be converted. Perhaps White must set up a timely sacrifice to free his pawn, while covering its advance. But then you are told that while this may indeed be a win it will take no fewer than 273 moves to reach a clearly winning position. What will inevitably leave readers not a little confused is how that win is reached and what it consists of. 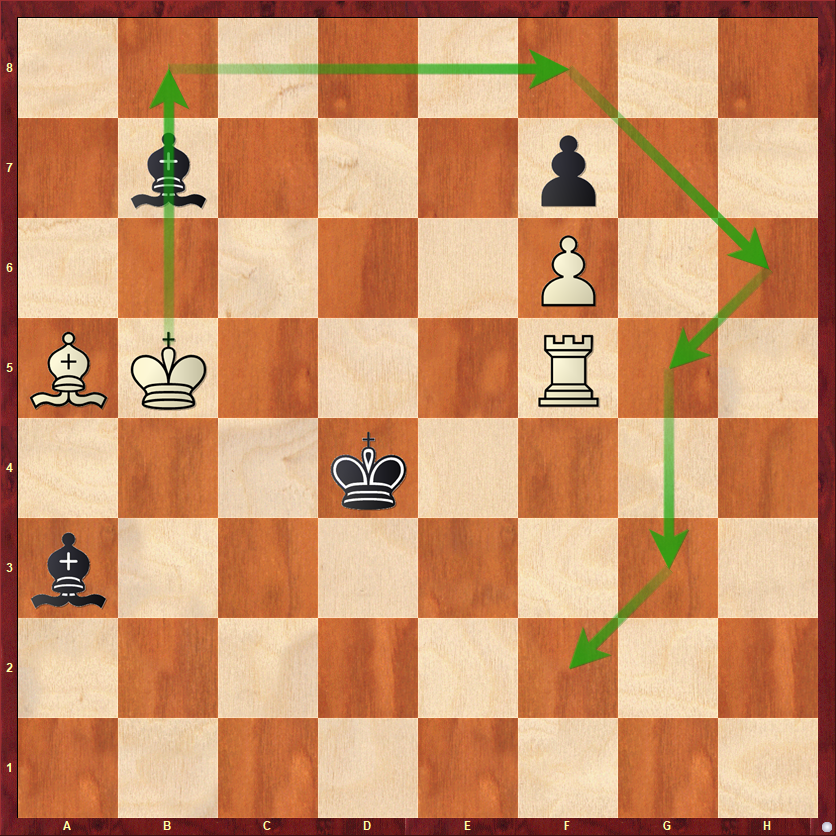 Indeed, the white king will race around the back of the pawns to h6 and then all the way down to f2…

After a staggering 129 moves to reach this position: 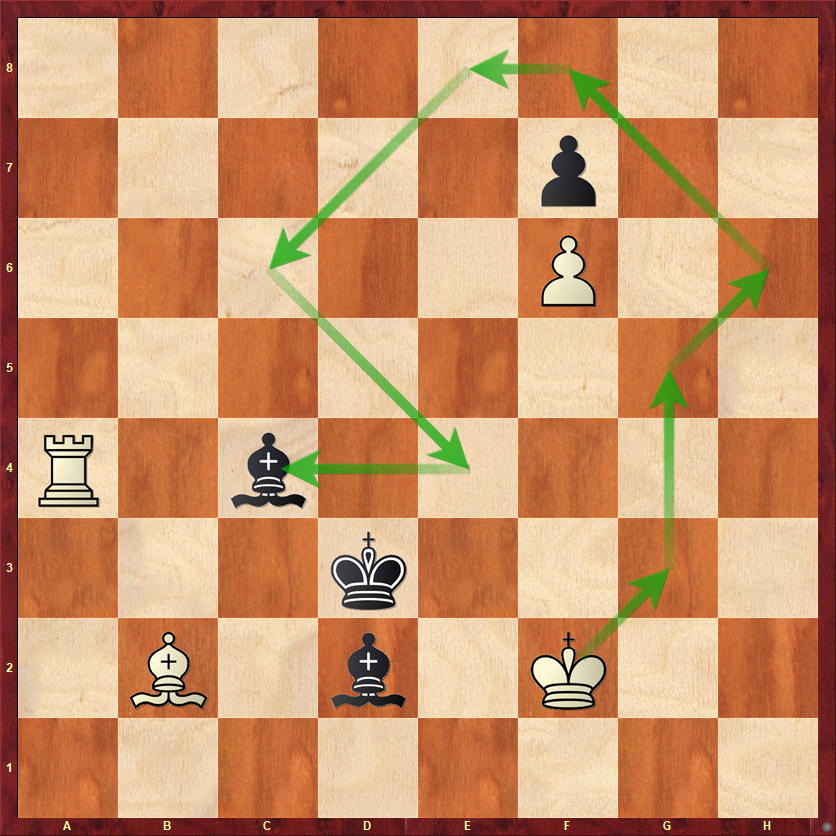 So how does White progress from here? White just needs to… race the king all the way back up via h6, from where it came, and through f8 come back to the queenside where it will end up cornering the king with mate threats and forcibly win the bishop after 273 perfect moves. Obvious! (This is stated entirely tongue-in-cheek).

How easy is that? I enjoin you to replay the solution.

Too many Cooks in the kitchen

In the world of endgame studies, a ‘cook’ is when an alternate solution is found, or when the desired outcome (win or draw) is proven wrong. In many ways, it is the bane of endgame composers, who attempt to marry mathematical precision with wonder and creativity, forcing them back to the proverbial drawing board.

The advent of tablebases and powerful engines has made this a much more common occurrence when analyzing older compositions, and modern composers work with such tools hand in hand by necessity.

While Marc Bourzutschky found a number of cooks for studies with eight pieces or that ended in such, one peculiarity stood out because a previous cook… was cooked!

This fascinating position, with far more than eight pieces, quickly dissolves to a much more manageable situation after 1. d7! ♜d3 2. ♘e2 ♜g4

In this position, the solution goes 3. ♖f2!+ followed by a lovely line that ends in stalemate. However, a previous cook had been announced here with 3. ♔h5!? suggesting this also sufficed to save the game. However, after the forcing line 3… ♜xg5 (Marc Bourzutschky) 4. ♔xg5 ♜xd7 5. ♖xa6 (what else?)

Marc notes here, “This position seems to be won for Black. Without the pawns, the 7-man EGTB indicates it would be won, and the presence of the pawns seems to favor Black, if anything.“

It isn’t over though, since the actual final position is itself completely cooked as well.

The given ending here is the aesthetically pleasing 9… ♜xd8 with a lovely stalemate. The composer deserves our respect and applause for his imagination at the very least. But as to the solution itself, it is sadly cooked. In a persistent moment of blindness, the idea of not capturing the queen was so contrary to instinct that all other moves were not even considered, unless you are consulting an 8-piece tablebase that is. Indeed, both 9… ♜d6! and 9… ♜g3! are winning for Black.

There is no question that the production of endgame tablebases brings us one step closer to absolute chess truth. The value of the work done thus far by Marc Bourzutschky cannot be understated, and it would be a huge lack of vision to think it of only academic interest even to competitive chess players.

The number of piece-pawn combinations to solve has ballooned with each iteration and he noted in the interview below that each could take days to resolve, even on his ‘low-end’ workstations with only 1.5 TB of RAM (no, you did not misread), and there are no fewer than 4795 to be exact.

Marc adds, in his original email to ARVES, that while some may be disappointed the record moves to a solution did not break any real ground, representing a modest hop forward, rather than a massive leap, this may be due to the symmetrical situation of even pieces inherent to the division of eight. With nine, we might indeed see solutions in the four digits, and he has already begun exploring this. That said, the full set of eight has yet to be solved, so should you wish to help finish this undertaking and have access to major resources, he is quite open to the prospect. As for now though, work on it has been put on pause.

Where to Go When You’re Fed Up with People

A triumph in sustainable tourism