Two leaders going into the final round

The inaugural event of the Grand Chess Tour is about to finish. With one round to go, Levon Aronian and Wesley So are tied for first place on 5/8 points, and are followed closely by Maxime Vachier-Lagrave, who stands a half point back. Given the ninth-round pairings, even the four players standing a half point behind MVL can still theoretically win the tournament. Of course, the likelihood of that happening is extremely low.

In case of a tie for first, the regulations of the Grand Chess Tour indicate that a playoff will decide who is declared the winner of the event. The tour points, however, will be evenly distributed according to the points obtained ‘in regulation’.

Saturday’s deciding round will see Aronian playing white against an out-of-form Shakhriyar Mamedyarov, while So will get the black pieces against Leinier Dominguez, who comes from playing three decisive games in rounds 6 to 8 (two wins and a loss). Vachier-Lagrave will play black against top seed Alireza Firouzja.

Aronian salvages a half point

Out of a theoretical line of the fashionable Giuoco Piano, Ian Nepomniachtchi blitzed out all but one of his first 21 moves. Aronian, who had the black pieces, took some more time on a few of his decisions. The US grandmaster agreed to enter an imbalanced endgame with a rook and a pawn against two minor pieces.

My Black Secrets in the Modern Italian

The Italian Game is considered a sound but quiet opening without early trades, giving rise to rich positions where plans are more important than forced variations. So shows black’s plans on this DVD.

The idea behind 21…Nb4 is that after 22.cxb4 Bxb2 White cannot prevent his opponent from gaining the exchange. The problem for Black is that, if his opponent manages to coordinate his bishop pair, he will be the one fighting for equality in the ensuing struggle.

Inaccuracies in the final moves before the time control left Aronian in an inferior position. However, the ever-resourceful Armenian never stopped creating problems for his opponent, as Nepo permanently needed to find precise continuations to keep his advantage.

White’s final mistake, which led to a draw instead of a win, came on move 75.

Nepo erred with 75.Ne5, when 75.Nh4+ was the way to go — of course, it is always difficult to choose the non-centralizing move.

After giving a check from h4, Black has nothing better than 75…Kg4, since 75…Kxg5 fails to 76.Nf3+, forking. Then comes 76.Ng2, attacking the rook, and thus White gains a few tempi to reroute his knight to the centre after having pushed the opposite king away from the action.

In the game, on the other hand, White’s continuation allowed the black king to grab the pawn on g5 and, more importantly, to be in time to transfer the monarch to the queenside. Aronian’s tenacious defensive effort was eventually rewarded with a half point, one that might turn out to be crucial in the fight for first place. 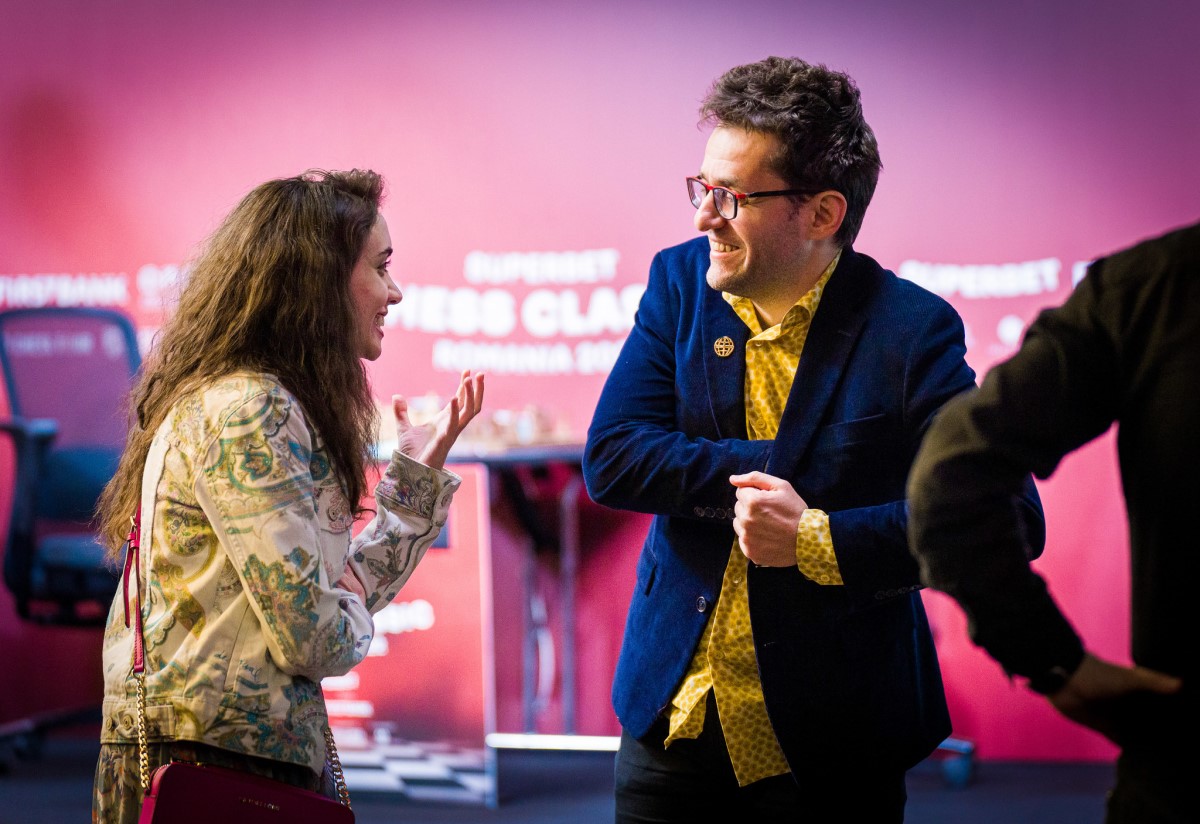 Defending champion Mamedyarov is not having a great tournament this year in Bucharest. The Azerbaijani has lost three games so far, and his only win — in round 7, over Nepomniachtchi — came after his opponent missed a chance to win and then erred in the endgame.

Against Dominguez, Shakh faltered in a sharp endgame with queen and bishop against queen and knight.

White needs to be extremely careful here. In fact, the only move that keeps the balance is 43.Qg3, focusing on the defence of the vulnerable king on h1.

Mamedyarov instead went for 43.Qg8, though, and resigned after 43…Qe5

Any attempt to give a perpetual check fails, as the black king can find shelter on h4, which incidentally is a dark square (i.e. it cannot be attacked by the white bishop). Furthermore, playing 44.Qg3 at this point no longer works due to 44…Qxf5, while 44.Be6 fails to 44…Qe4+ when the queen and knight duo is perfectly placed to either give mate or provoke massive material concessions.

Dominguez thus bounced right back to a fifty-percent score after his loss on Thursday.

Funniest Reactions to Lechonk from Pokémon Scarlet and Violet