Personally, I have met a lot of strong players: Kasparov, Karpov, Korchnoi, Spassky, Euwe, Botvinnik and Reshevsky. So it was tough for anyone to beat me. In the feedback at the time readers tried to keep up with me – not easy, as I was one handshake away from Janovsky, Drake, Fine, Capablanca, Aljechin, and many others. Few came close. Except one:

Asa Hoffmann wrote: Dear Frederic, I have met every world champion from Euwe to Carlsen. I also met Bronstein, Geller, Korchnoi and Averbakh. In the US, I played Fischer (hundreds of blitz games), Reshevsky, Fine, Lombardy, Bisguier, Evans, Benko, Larsen and Anand. I also played Rossolimo, Kupchik, Horowitz, Kevitz and Kmoch. I’ve played many players who were born in the 19th Century, among them Edward Lasker, Harold M. Phillips, I.S. Turover, and Herman Helms. I think anyone who can beat my record would be 100 years old! I am busy writing my memoirs.

In a separate challenge mathematics Professor Christian Hesse proposed a “winchain” challenge: is there a player you have beaten, who has beaten someone, who has beaten someone, who beat a World Champion? It is astonishing how close you can get – like a 2144 player, Fabian Brinkmann, being just three steps away from Magnus Carlsen. Fabian wrote a nice little ChessBase app which will help you search for your winchains.

Once again it was Asa Hoffmann who beat us all. I have known him for decades, having met him in New York, initially in the Manhattan Chess Club, in the 1990s. He made a brief appearance (played by Austin Pendleton) in the movie “Searching for Bobby Fischer.” 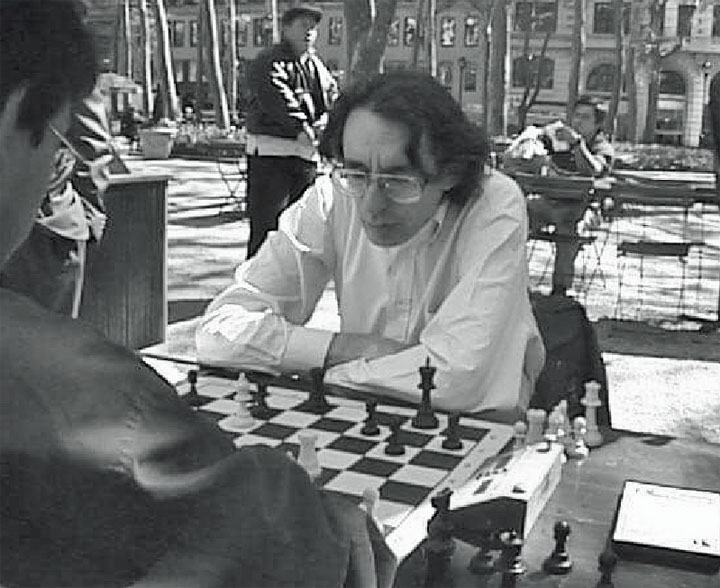 Asa playing in the Bryant Park in the 1990s 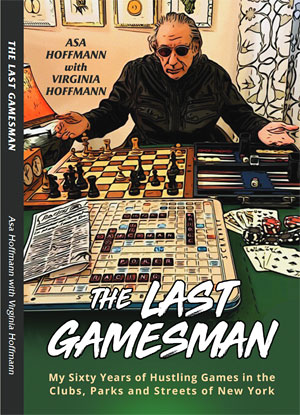 Now, at last, Asa’s book has been published. It is the story of a legendary New York chess player and master of backgammon, poker, Scrabble, bridge, and horse handicapping.

Born into a privileged family of two attorneys, Asa was sent to the best schools, including Horace Mann and Columbia University, but after a year at Columbia left school and his Park Avenue family home to make a living “hustling” chess and other games in the streets, parks and clubs of New York City. His character is portrayed in the book and film Searching for Bobby Fischer.

The Last Gamesman: My Sixty Years of Hustling Games in the Clubs, Parks and Streets of New York, by Asa Hoffmann with Virginia Hoffmann, published by Gatekeeper Press (March 3, 2022), can be purchased from Amazon as Paperback ($24.95) or Kindle ($12.99).

Asa sent me a copy directly, and I read it, cover to cover, in two day. It was a fantastic excursion into the world of New York chess, spanning sixty years. It refreshed memories of an atmosphere I had experienced in the late 1980s and 1990s.

I would like to give you some samples from the book, and will do so in the near future. For today, however, I would like to simply quote the excellent review provided by Frank Brady.

Throughout history, there have been more books published about chess than any other game. Books on openings, game collections, biographies, problem books, tournament books, end game and middle game treatises, and even analyses of specific positions, keep publishing year after year.

Chess Master Asa Hoffmann’s memoir – written with his chess player wife Virginia D’Amico Hoffmann – is, however, unique among all of chess literature. There are no games (save the one with Fischer), no analyses, no diagrams in this work. This is a penetrating and honest story of a young man attempting to find his way in life on his own through the sixty-four squares, and it’s filled with insights, anecdotes and yarns never-before published or known about him and chess itself.

No other World Champion was more infamous both inside and outside the chess world than Bobby Fischer. On this DVD, a team of experts shows you the winning techniques and strategies employed by the 11th World Champion.

Grandmaster Dorian Rogozenco delves into Fischer’s openings, and retraces the development of his repertoire. What variations did Fischer play, and what sources did he use to arm himself against the best Soviet players? Mihail Marin explains Fischer’s particular style and his special strategic talent in annotated games against Spassky, Taimanov and other greats. Karsten Müller is not just a leading international endgame expert, but also a true Fischer connoisseur.

The scion of Park Avenue attorneys, Hoffmann chose to eschew his parents’ plans for him to follow in their leg al footsteps to become a successful lawyer. He was sent to some of the best schools in New York City (Hunter, Horace Mann, and Columbia University), but it was the game of chess that became his tutor, his Alma Mater, as well as his pleasure and his obsession. And ultimately, his profession.

On his lifetime journey financially supporting himself solely through the game of chess, he has made a million dollars. And he tells, with great detail, how he did it: the hard way. He played countless speed games at twenty-five cents and up. And he played day in and day out, teaching players with flash-lessons at a dollar a minute and lecturing at chess clubs for whatever was the going rate. In between his non-stop routine he managed to write three books, all of which were well-received. Hoffmann takes the reader through his complicated and exciting life, filled with anecdotes and interesting stories, spinning Mark Twain-like yarns about chess in New York City. He is totally uninhibited.

But perhaps the most fascinating aspect of his memoir is his recollection as he lived this life of chess in the Big Apple. He weaves remembrances of players as would a novelist. Here we see him playing some of the great players of his day, from Reshevsky to Fischer, from Evans to Kamsky. As a youngster, he and a number of the up-and-coming chess players would walk the streets at night, looking for a café or a pub so that they could play all night long. And he did, often until dawn. By honing his technique in playing such gifted players, Hoffmann became one of the country’s top speed players.

He describes with clarity and flare the atmosphere and inner workings of the Manhattan and Marshall, the two leading chess clubs in the United States. When he entered young manhood, he was elected a member of both Boards of those clubs, and his observations and comments as an insider will undoubtedly become an important part of chess history. His memory of how players reacted to each other is virtually eidetic, and he has a playwright’s ear for dialogue as he sits at the board trading “trash talk” while playing five-minute games. His descriptions and recollections of playing at the so called “Flea House,” the 24-hour-never-closing chess emporium that had enough Runyonesque characters to fill a Moss Hart play, are hilarious.

Throughout the book one might discern a touch of wistfulness, but no regret that he did not attend law school, and that he had lived his life, as he still does, playing chess. As the reader will discover it’s been an exciting and respectful life, and totally singular, a life that no one else but Asa Hoffmann could have lived.

Although there have been a number of memoirs, and autobiographies such as those written by Grandmasters Mark Taimanov, Victor Korchnoi, Mikhail Tal, and others, Asa Hoffmann’s book is one that is easily and enjoyably read and will not be easily forgotten.

From the prologue by Asa Hoffmann

I have heard the stories of the great raconteurs for sixty years or more. Knowing players such as World Champion Grandmaster (GM) Bobby Fischer, GM Bill Lombardy, GM Yasser Seirawan, GM Nicholas Rossolimo, GM Walter Browne, the famous artist and chess player Marcel Duchamp and many others gave me the idea to record my own memories. It seemed to me that in addition to my games, my legacy could include stories about an era in New York City chess history that was a special time, never to be repeated and about the unique characters that inhabited that period. I have also had the good fortune to know a wide range of champions and colorful characters who stood out in the worlds of horseracing, Scrabble, poker, bridge, and backgammon. These were the players that lived in the world I managed to make a living in for 60 years, hustling, battling, and plying my trade and knowledge in the clubs, streets, and parks of New York City.

Although I am a master of many games, Chess has always been closest to my heart. Over the past 60 years I have played well over 10,000 tournament games and won hundreds of events. I hold the titles of US Senior Master, US Life Master and FIDE Master, the third-highest title awarded by the International Chess Federation (FIDE), behind Grandmaster (GM) and International Master (IM). But for me, the greatest triumph is to be involved in the game itself, always playing, struggling, fighting against all odds and opponents. However, I have observed that the game itself and the compulsion to make a career of chess is to engage in a sado-masochistic exercise – where winning brings on euphoria, but losing elicits despair, albeit temporary.

I had been making notes for years for a memoir, but only got the incentive to do the work of writing it with the encouragement of my wife and fellow chess player, Ginny Hoffmann. She helped me by both organizing my notes and doing the demanding work of researching, co-writing, and editing the book. She also knew many of the characters and places in the book and supplemented my memories of them.

Best Mother’s Day Gifts That Your Mom Will Cherish

Best Mother's Day Gifts That Your Mom Will Cherish

On this Day: Lennox Lewis robbed in New York, held to contentious draw with Evander Holyfield

Amir Khan vs. Kell Brook is finally on, February 19