Quick losses for Carlsen and Pragg

Three out of four matches in the final round of the Oslo Esports Cup were decided after three rapid games. While it was not shocking that Jan-Krzysztof Duda defeated an off-form Eric Hansen by a 2½-½ score, the quick losses suffered by co-leaders Magnus Carlsen and Praggnanandhaa were rather unexpected.

Carlsen was defeated by Shakhriyar Mamedyarov, who entered the last round in fifth place, while Pragg lost against Anish Giri, who was second-to-last with 6/18 points before Thursday’s round. Both Mamedyarov and Giri are perfectly capable of taking down even the strongest players in the circuit on any given day, but given their performances in the tournament, it was surprising to see them beating the co-leaders in such a manner.

Duda was trailing Carlsen and Pragg by a single point, much like Le Quang Liem. In this tournament, an outright victory in the 4-game rapid portion of the match granted 3 points to the winner, while a match decided in blitz tiebreakers granted 2 points to the winner and 1 point to the loser.

The eventual champion’s convincing victory over Hansen gave him clear victory, while Le also leapfrogged Carlsen and Pragg, but only managed to collect 2 points, as he defeated Jorden van Foreest in tiebreaks.

For Duda, this triumph will serve as a great confidence booster, as we are less than two months away from the start of the Candidates Tournament in Madrid. The Polish grandmaster will be one of eight players fighting for the right to challenge Magnus Carlsen in the next World Championship match — if the Norwegian decides to defend his crown, after all. 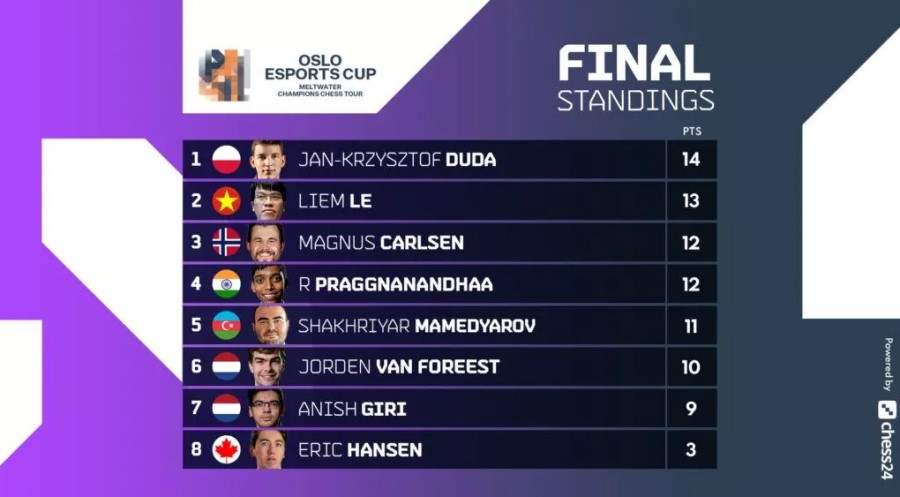 Back-to-back wins at the start of the match gave Duda a comfortable edge over Hansen. First, Duda won with black in 27 moves out of a Ruy Lopez.

The chessbrah had gone all-in from the outset, pushing his h-pawn and leaving his king in the centre. The aggressive approach badly backfired, as after 19…Nf4 White has no satisfactory way to deal with Black’s counterattack.

After 20.Bxf4 exf4, 21.Nf1 is the only move that saves the knight on g3, but the retreating move is clearly undesirable, to say the least. Hansen gave up the piece with 21.d4 and resigned six moves later.

Game 3 lasted 86 moves and saw Hansen missing a few chances to gain a larger advantage in a slightly superior endgame, but Duda defended tenaciously and got the draw he needed to claim tournament victory.

After holding a draw with black, the world champion was the one making the last mistake in a difficult knight ending in game 2. Down on the scoreboard, Carlsen blundered in a worse — yet defensible — position in the third encounter.

40…d5 simply allowed 41.Rxc5, and the white rook has been swiftly activated. Carlsen, who suffered from a severe cold at the start of the event and confessed to be extremely tired, resigned the game and the match three moves later.

A subpar performance in the previous rounds allowed Giri to play freely against his teenage opponent. The Dutchman opted for a King’s Indian Defence while playing black in the first encounter. After giving up a pawn on the kingside, the world number 8 crushed through in typical KID style.

A draw followed, while another victory with black in game 3 meant Giri had managed to end the tournament on a high note.

After trading wins with white in the first two games, both Le and Van Foreest missed chances in game 3, which ended in a 60-move draw. Van Foreest had the white pieces in game 4, and could have won the match in the rapid portion — had he found a mating sequence in an ending with two minor pieces against a rook.

Instead, Van Foreest played 61.Nb6 and ended up drawing the game.

In what was by far the longest match of the day, Le got a 1½-½ victory in the ensuing tiebreakers. Thus, the former world blitz champion grabbed sole second place.

Kakampinks Flocked to Rockwell After Cat Arambulo Failed to Show Up

Kakampinks Flocked to Rockwell After Cat Arambulo Failed to Show Up

Carlsen is (still) the champ! – Games and commentary