In the tournaments of the Meltwater Champions Chess Series Carlsen is usually the favourite and in the focus of interest but in Oslo the 16-year Indian Grandmaster Praggnanandhaa, the youngest player in the field, took the limelight. Early in the tournament the World Champion, who suffered from a severe cold, lost his match against Vietnamese Grandmaster Le Quang Liem, while the Indian youngster rushed from victory to victory.

But in round 4 Carlsen won the direct duel against Praggnanandhaa 3:0, only to lose one round later against his second Jorden van Foreest. In this match the World Champion also suffered from a rare case of chess blindness and blundered a whole rook in one move.

After five rounds and with two rounds to go Praggnanandhaa was three points ahead of Carlsen and had good chances to win the tournament. But in the penultimate round Carlsen had to play Eric Hansen, who has the lowest rating of all the eight players in Oslo, while Praggnanandhaa had to deal with Jan-Krzystof Duda.

The match between Carlsen and Hansen was rather one-sided, and Carlsen defeated the Canadian chess streamer, who seems to be off-form, 2.5-0.5.

Things were more difficult for Praggnanandhaa. In the first game, in which the Indian had Black, an unusual setup in the English Opening led to a major piece endgame which Praggnanandhaa could not hold.

In the second game the two Grandmasters had a long theoretical duel in the Grünfeld Defence. 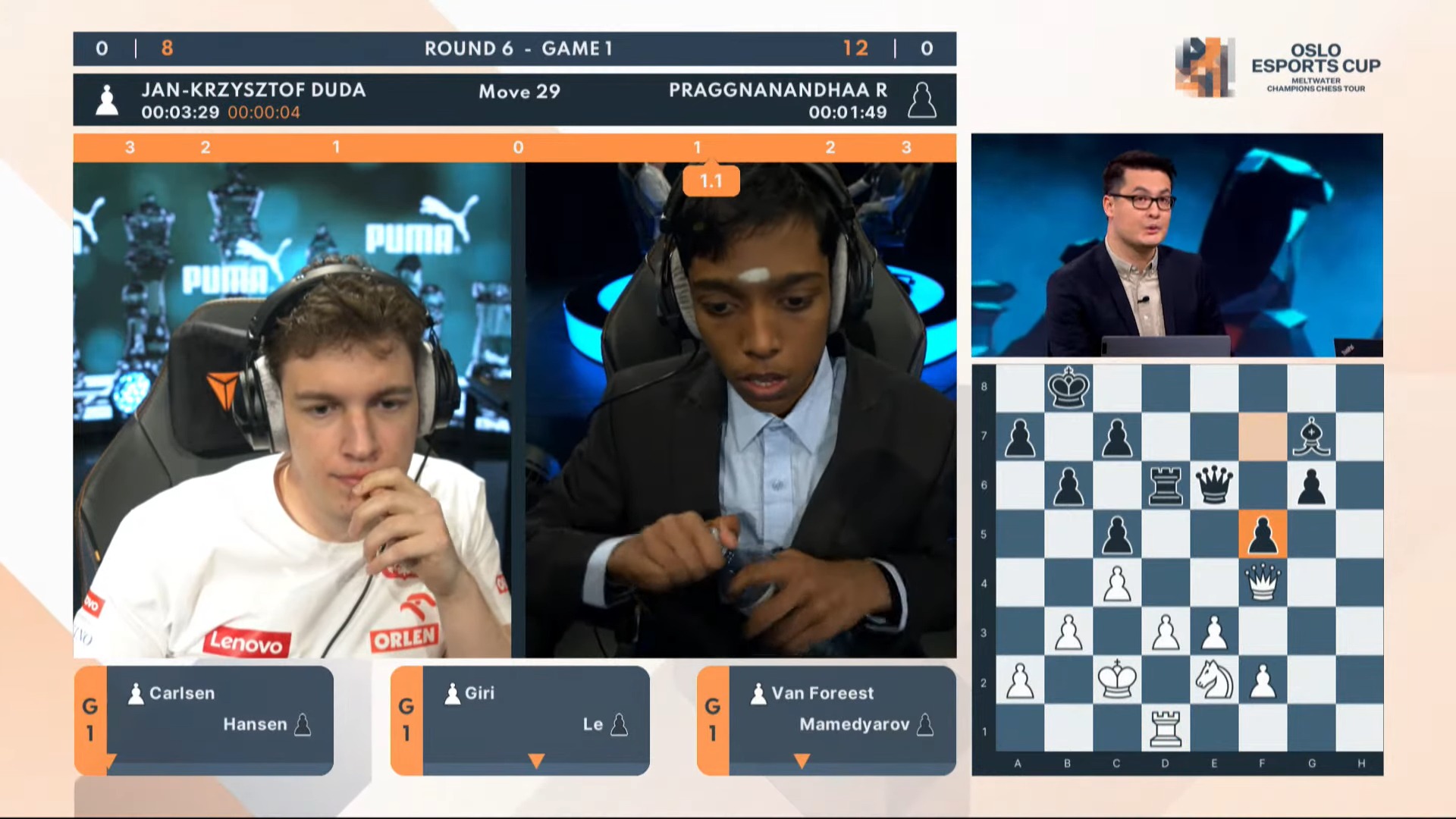 The third game then ended in a draw which gave Duda a clear 2.5-0.5 victory.

One more short day, again at the receiving end for @rpragchess at Oslo rapid @ChampChessTour . Pushed too hard and lost in game one, great position bungled in game two, and a lucky draw in third game. Tomorrow final round.

The match between Le Quang Liem and Anish Giri was won by the Vietnamese. Le won the first and the second game, and then a draw in game three game was enough to decide the match. In an interview Giri reflected on the difficulties he had with the mouse, wondering whether it’s better to “drag” or to “click” but was sure that mixing both is not a good idea.

Jorden van Foreest and Shakhriyar Mamedyarov played the longest match of the round. After a draw in game 1, van Foreest went ahead by winning game two. After another draw in game three, Mamedyarov was in a must-win situation but showed good nerves and equalised the match by winning the fourth game, and then also decided the tiebreak in his favour.

In the seventh and final round Carlsen plays against the unpredictable Mamedyarov while Praggnanandhaa has to face Giri. Asked if he can win the tournament tomorrow, Praggnanandhaa said: “I just want to play better chess tomorrow and then we’ll see.”

Duda also has theoretical chances to win the tournament as he is only one point behind the two leaders. He would have to win against Hansen and hope for defeats from Carlsen and Praggnanandhaa. 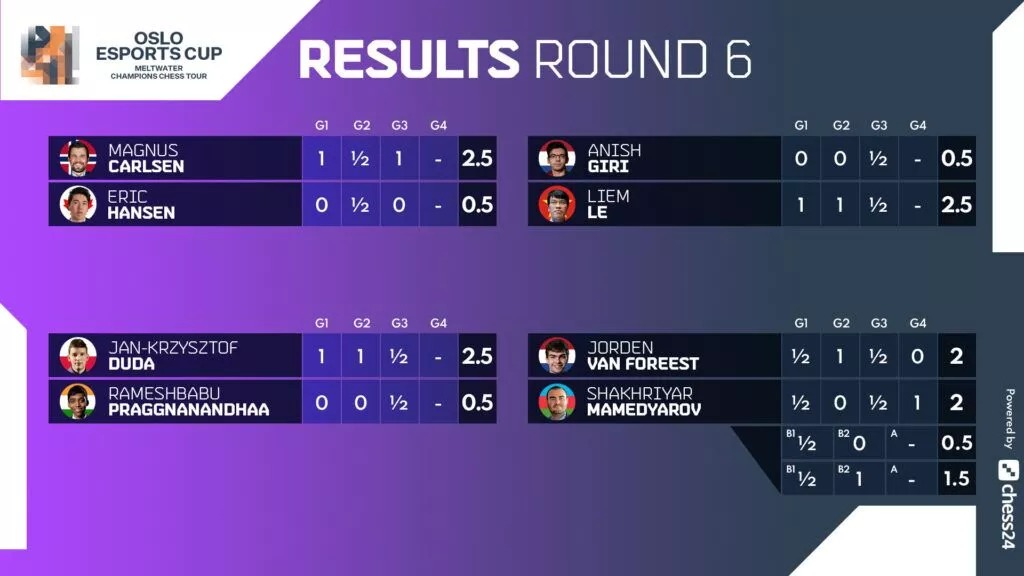 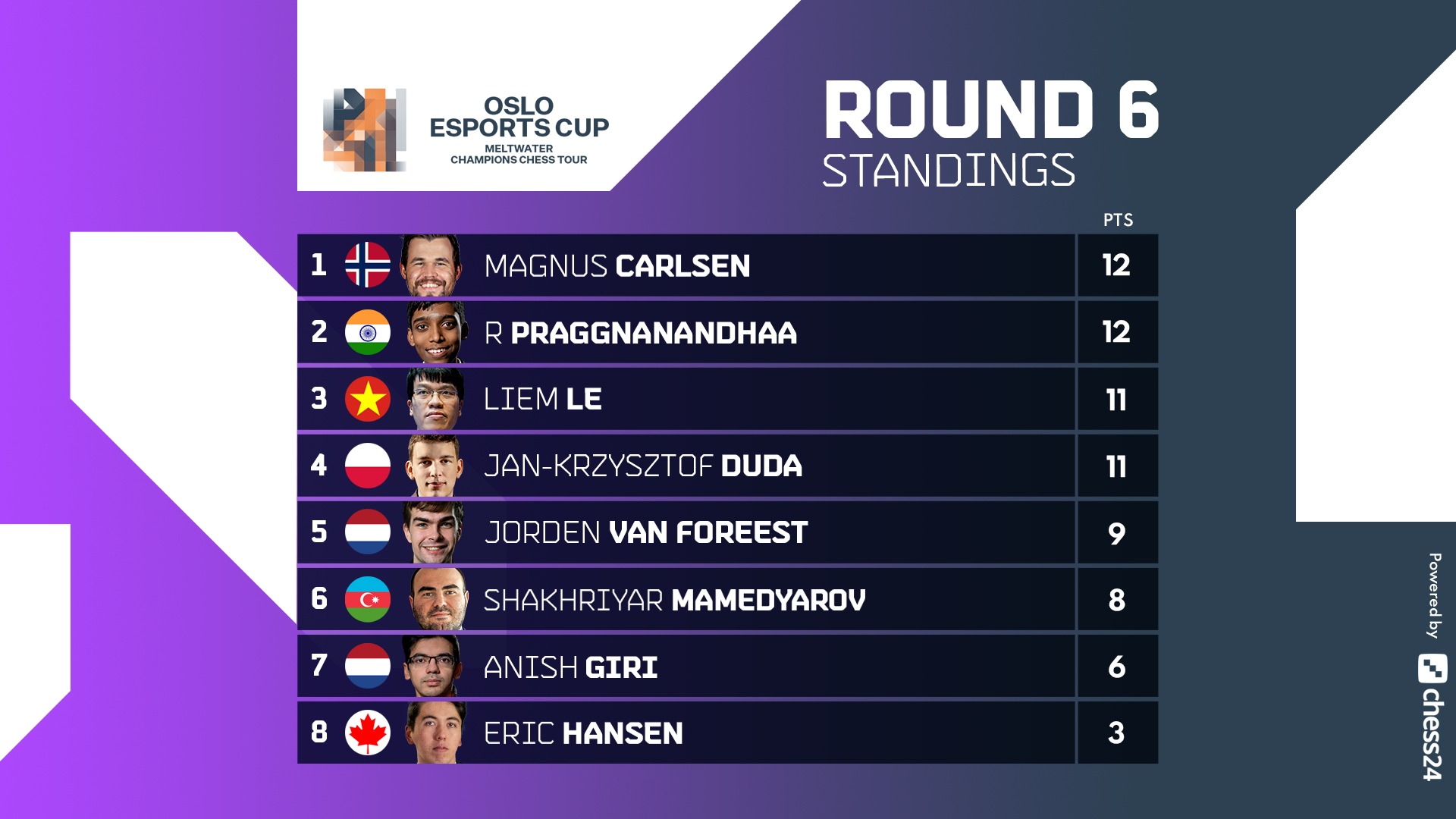 Getting Ready to Work in the New Normal

Svitlana’s Smart Moves – How to start an attack from scratch

Svitlana's Smart Moves - How to start an attack from scratch