The players who lost their matches were relegated to the Elimination Bracket, where they will get a second chance to win the tournament starting tomorrow. 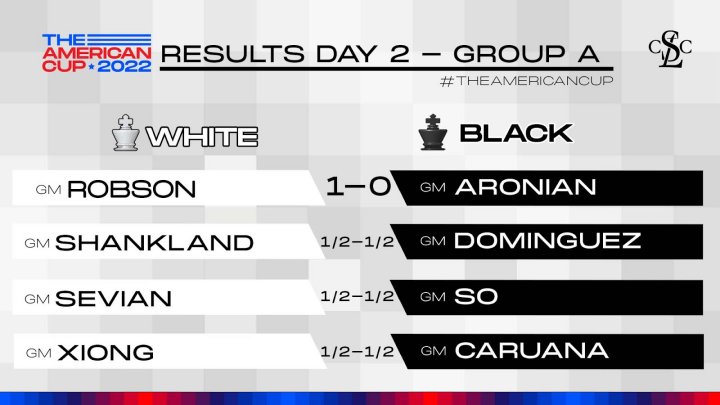 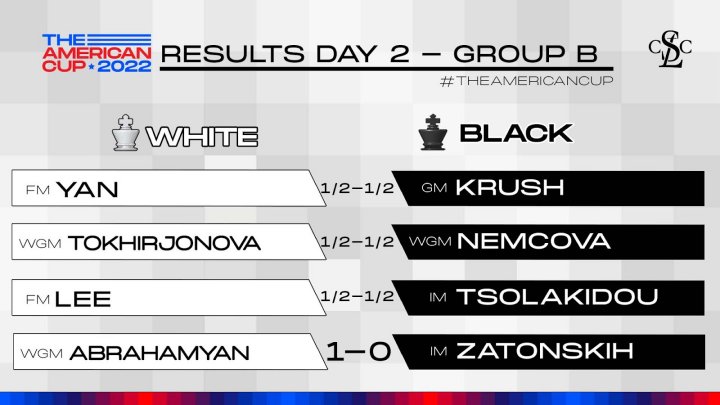 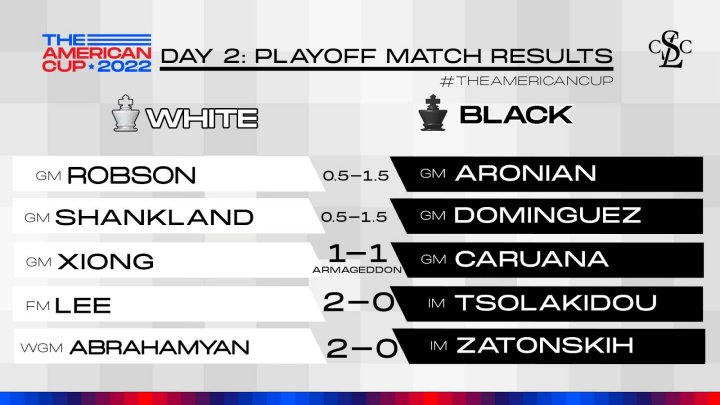 Check out the full replay of live coverage from the day here. The time control for the event is 90 minutes plus 30 seconds increment for all games in the Champions Bracket, with a rapid time control of 25+10 for the Elimination Bracket and a 10+5 time control for all playoff matches. 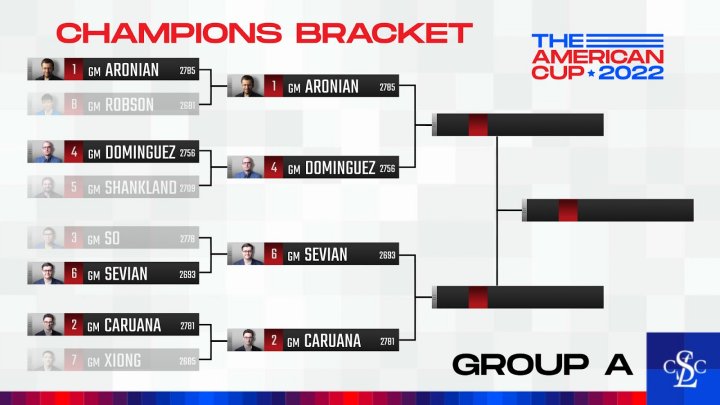 After losing yesterday’s game, Robson needed to strike back today and was gifted a fantastic exchange sacrifice opportunity thanks to a strange slip by Aronian in the opening. Robson then continued well to reach a winning endgame with 6 pawns for a piece, that he went on to  eventually convert, forcing a playoff.

The first game of the playoff saw the players repeat the English Opening from earlier, but this time Aronian was much better prepared, putting serious pressure on the board and on the clock. In a slightly worse position, Robson overlooked a tactical blow that was simply winning for Black on the spot, and Aronian pounced on the chance to win the first game.

In the second game Robson managed to get a slightly better position out of the opening, and again went for an exchange sacrifice to create some serious imbalance. However this sacrifice was less promising, and Aronian had few issues defending and securing the draw. 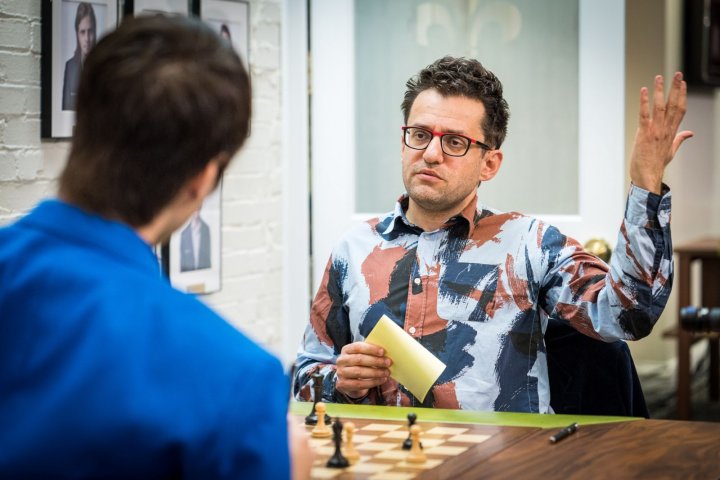 The second classical game in this match was fairly solid throughout, with neither player making any significant mistakes on the way to a draw. However Dominguez started to pull away in the rapid playoff, after nearly winning the first game with Black he then managed to outplay Shankland in a very sharp ending in the second game, taking the match. 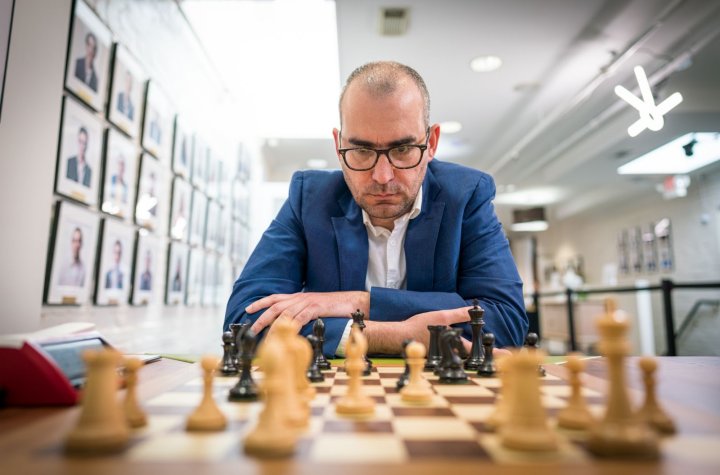 Despite an even classical, Dominguez was able to show better nerves in the rapid playoff. | Photo courtesy of Saint Louis Chess Club, Lennart Ootes

Needing to win today So chose an unusual variation of the Queen’s Gambit Declined, where White gets a slightly better endgame but with plenty of pieces on the board. Hoping to outplay Sevian in the endgame, So was unsuccessful, and was even worse when the players decided to repeat moves in a rook ending. The draw allowed Sevian to advance to the next stage, as well as cross 2700 FIDE in live rating for the first time in his career, a huge milestone. 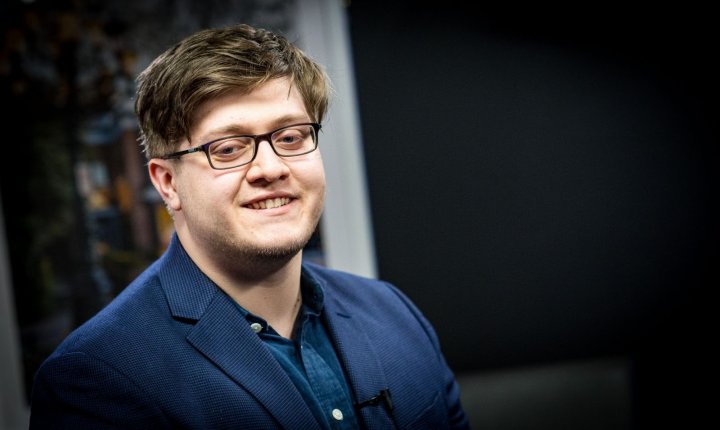 A second draw in the classical meant the players would decide it all in the rapid playoff. While Xiong was not able to get anything in the first rapid game, in the second Caruana gained a nearly strategically winning position right out of the opening. But Xiong held with persistent defense, and the players would head into Armageddon.

The Armageddon match saw Caruana having White with 5 minutes against Xiong’s 4 minutes, along with draw odds. A repeat of the previous rapid game gave Caruana another decisive position, though again he was unable to convert and even eventually finding himself in a lost endgame. A time scramble ensued and in a completely won ending Xiong ended up flagging while making his 60th move, losing the game. Had he gotten his move down in time, the clock would have activated a 2-second increment starting with the 61st move. 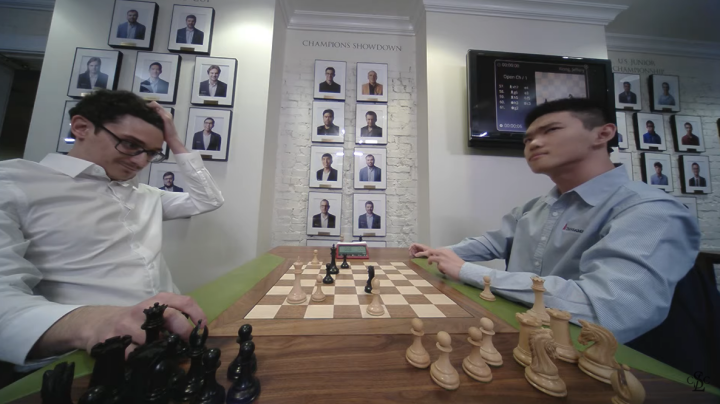 After a tense Armageddon, Caruana was visibly relieved. 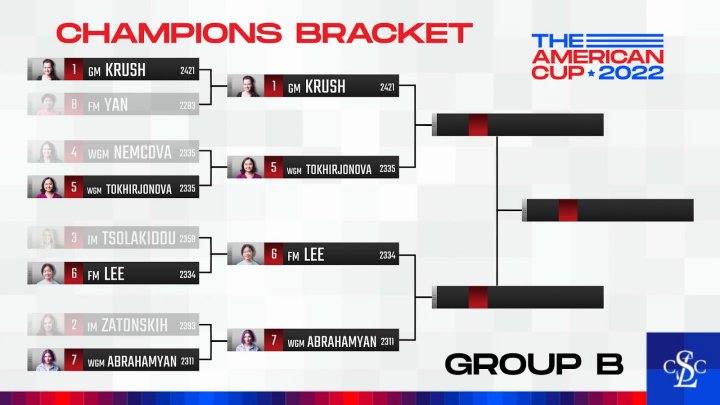 After winning Game 1 Krush surprised her opponent with the Four Knights Sicilian today, an opening she had never played before. Yan quickly faltered out of the opening and soon it was only Black (Krush) who could play for the win, with the game ultimately drawn in the end. 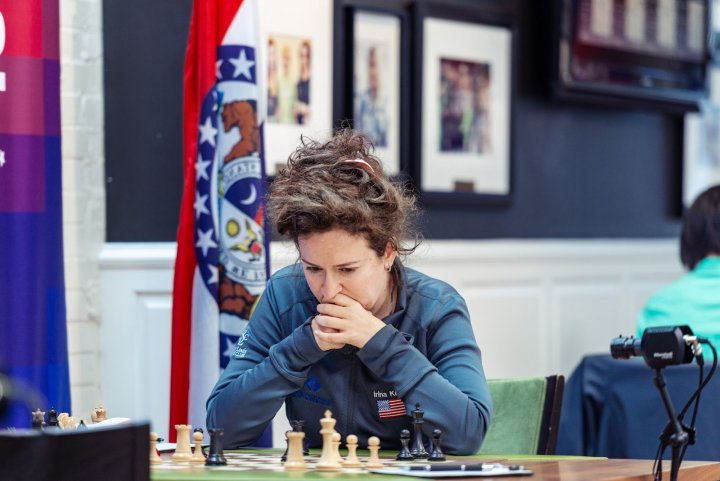 Also needing just a draw to advance, Tokhirjonova found a solid setup with White in a Queen’s Gambit Declined and obtained a small advantage out of the opening. To the commentators’ surprise, Nemcova allowed a repetition of moves early in the middlegame and the game was soon drawn.

After a rollercoaster draw yesterday, today’s game was less hectic, with Lee missing a chance to gain a decisive advantage out of the opening and later being unable to create serious winning chances, resulting in a draw.

The first game of the playoff looked quite drawish as the players entered an endgame with opposite colored bishops. However in time trouble Tsolakidou ended up pushing too hard and blundered away the game.

Thanks to a trendy exchange sacrifice in the Queen’s Gambit Accepted, Lee was able to control the second game of the playoff and even went on to win it, clinching the playoff 2-0. 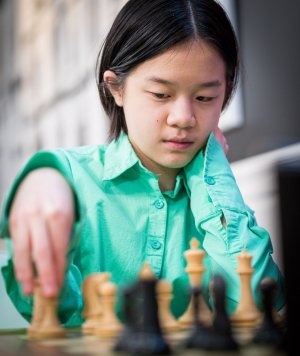 Facing a must-win situation, Abrahamyan seized a serious advantage after Zatonskih misplayed the opening in a Petroff Defense. Although Tatev was unable to capitalize effectively, she did manage to reach a heavy piece endgame which was quite unpleasant for Black. Zatonskih defended well for some time but ended up missing an only defense in a critical position, losing the game on the spot.

In the playoff, Abrahamyan got White in the first game and the players soon found themselves in a heavy piece endgame that resembled their earlier encounter. Once again Zatonskih was unable to defend correctly in time pressure, and lost on time in a hopeless situation. The second game saw Zatonskih playing aggressively on the kingside, but quickly overextended and lost control over the position. Not long after Zatonskih hung a piece, and Abrahamyan was able to convert smoothly to win the match. 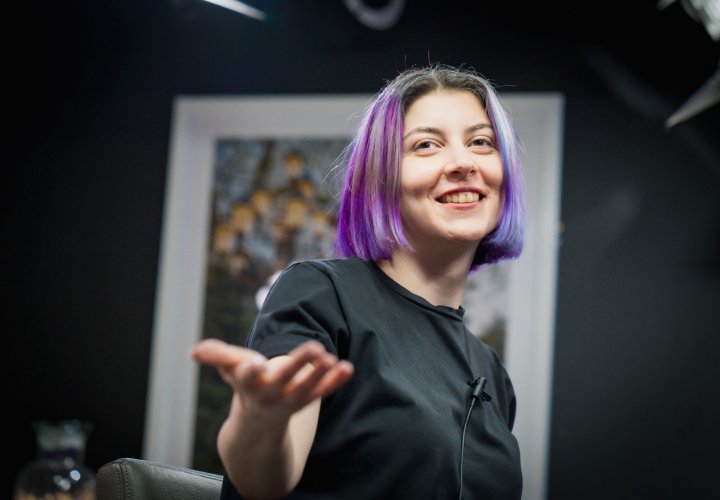 Day 3 of the 2022 American Cup will take place Friday, April 22 starting at 12:50 PM CT. Catch all the action live with grandmaster commentators Yasser Seirawan, Cristian Chirila, and Alejandro Ramirez on uschesschamps.com and on the Saint Louis Chess Club’s YouTube and Twitch.tv channels.