Listening to your mom, your body, and knowing your limits: Jary’s weight loss journey 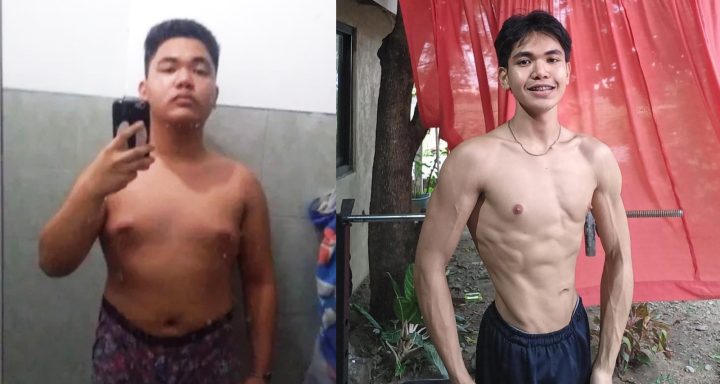 A few weeks ago, Jary Ercia’s weight loss journey caught our attention. He is one of the PF Community’s younger members as he is now 20 years old and in his second year in college. He jokes that he believes his story is the epitome of hard-headedness, that his main takeaway from his weight loss journey is that mama knows best in a lot of things in life. From his own words, here is a summary of how he transformed from “being obese, to ‘wasted,’ and now on better progress into becoming healthy.”

Jary enjoys computer games, playing basketball with his friends, but most of all, “Mahilig akong kumain! Sobra!” he replied as I asked him to describe himself. He said that he played basketball as part of spending time with friends, but he also knew that it was not enough to outrun his love for food.

He recalls that he started gaining significant weight after graduating elementary. It was during his second year in high school when he noticed that his weight continued to increase as the years went by. Like almost every Filipino family, their form of bonding is eating together. With four other siblings, along with his parents, they are a family of seven. They all love eating out and Jary even disclosed that “Masarap pa magluto sa bahay!” Since they are a big family, Jary quipped, “palaging boodle fight ang dating, kahit wala yung set up.” Nakakagana nga naman talagang kumain kapag marami kayo.

The impetus to make changes

Toward the end of 10th grade in high school, something changed in Jary. Although Jary knew that he had always been the “big guy” in school, he also had a sunny disposition. His happy-go-lucky nature blessed him with a lot of friends. But this still did not save him from the banter and hirits about his weight.

Support us by joining our Virtual Events

Jary shared that his PE Teacher mentioned that his BMI was not healthy at the start of school year 2018-2019. He took note of it, but did not do anything about it right away. He went through the school year with a few banters, but he specifically remembered what his close friend joked to him: “Bakit parang mas lumalaki pa tayo?” The biggest impetus was that at the end of school year, his PE teacher showed him his photo and mentioned his BMI again. So Jary said, “By that time, I really knew I needed to change. I was about 215 lbs that time, the year was 2019.”

Essential Items That Deserve a Spot in Your Bathroom Top Shelf

One step at a time

The first activity he could think of doing was running. He shared that his parents had a treadmill long ago, but it was seldomly used. He even joked that “Mas madalas pa siyang pagpagan at linisin kesa gamitin talaga!” Since the treadmill was already there, he decided to make use of it. He also added that at least with running on the treadmill, he did not have to rely on friends so much just so he could play basketball.

Jary’s first serious attempt on the treadmill was only for ten minutes. He started with a short warmup walk and then tried to do a very slow jog. He remembers that only 30 seconds into the slight jog, he started heavily breathing. He wanted to jog for 10 minutes, but he felt like his knees would break, so he ended up walking the rest of the time. But after that first session, he remembers saying to himself that he enjoyed the sweat, “Nabuhayan ako. Ang sarap pala mamawis!”

He was instantly hooked to it that he wanted to do it again the next day. The treadmill became his best friend. He searched for easy running programs on YouTube as he wanted to do things right. ”Kung gusto ko talaga siyang gawin part ng aking lifestyle kailangan somewhat knowledgeable ako”

Day 2 with the treadmill and he applied one of the programs he found online. He started off with two minutes of walking and 30 seconds of jogging and did this four times. As days passed, he started adding intensity and time in every session. In one and a half months his friends started noticing the change. He loved the results, so he consistently did it. After three months, Jary managed to lose about 35 to 40 lbs.

Too much of something is bad

For Jary, he always reminds himself of two turning points in his new fitness journey, and these turning points were his wake up calls to develop a better habit and routine.

Still within the year 2019, after his first round of weight loss, Jary decided to start his “bulking up.” Upon his friends’ wheedling, Jary tried out doing weights. They all signed up for a membership at their neighborhood gym. He noted that the runner’s high is different, but admitted that he still got hooked to weight lifting.

Jary’s first turning point: He learned that he did too much too soon. The gym attendants had recommended too much volume and intensity for an 18 year old like him. But he did not know this at that time. A few months later, he started bulking. He went back to eating a lot. Although he noticed this, he thought that since he was burning it while working out, he could get away with it. Something in him said “Sige nga magpalaki na rin ako, ang liit ko pala compared sa kanila.”

At this point his parents were already telling him “hinay hinay, medyo lumalaki ka.” His researching in YouTube told him to “eat big to get big.” But true to his parents’ words, during the first months of 2020 all the weight he lost through running came back. Not to the point of obesity, but he felt abnormally big and he didn’t like it. He felt like there was something off.

By March 2020, all gyms were closed anyway, so Jary went back to running, but this time he did so around their neighborhood. We all know how 2020 hit us, and for some of us, we really sought outlets for our stress and worry. Things happening around the world got to Jary and he turned to running as his solace.

He felt that his endurance significantly improved, but noted that “ramdam ko yung bigat dahil sa pag gym.” Jary’s second turning point: he dropped doing weights completely. For fear of gaining his weight back, Jary ran every day. He said that he always started his day by looking at his weighing scale and it became his source of motivation. The highs and lows of our country’s different pandemic restrictions still affected him, gyms remained closed, so he thought running every day was the only way to go. 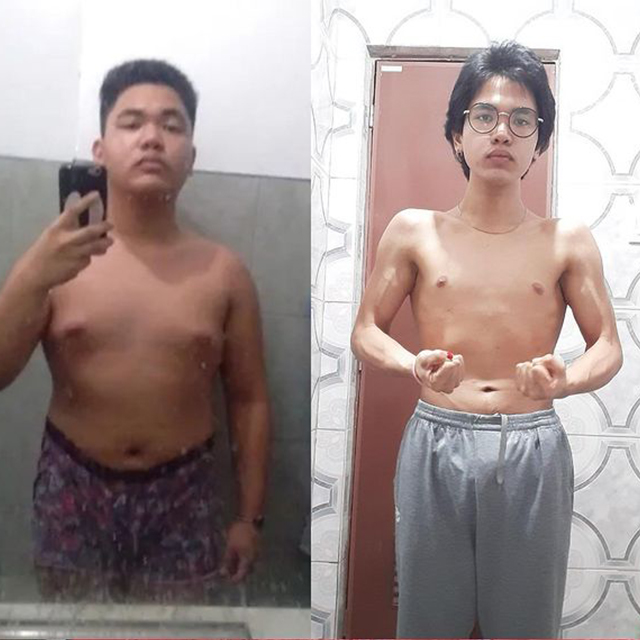 “It became an addiction,” Jary confessed. His parents were the first to notice the change and at this point they were saying “Sumosobra na, sobrang payat mo na.” Since he completely dropped doing weights and only did cardio, Jary surmised that his muscles lost stimulus. Add to that his under tracking of calories. The result? He became, in his words, “bone-thin,” weighing just around 115 lbs, standing about 5 feet 6 inches tall.

Nearing the end of 2020 his parents were already telling him to take it easy and that maybe he was doing too much. His mom was already urging him to get a coach, someone more knowledgeable, but at first he disregarded her comments.

This resulted in further conflict between Jary and his mom and it affected him so much that he stopped running for two weeks, but still people at home noticed that he continued to lose weight, even without exercising. It dawned on Jary that if he does not address this predicament, this might lead to medical complications. But during this stage, it was hard for Jary to accept that he did not have a healthy relationship with food and exercise, so it resulted in an unhealthy relationship with people. “Wala akong gana to see and talk to people, wala akong gana to do other things. It took me three months to move on.” After much reflection, Jary decided that he did not want to be a burden to his family, noting that his two brothers and mom are diabetic.

By January 2021, Jary finally decided to look for a fitness coach. From then on he said that he went through a 360 degree change. He said that with his coach he learned to bulk up in a proper way and started eating more intuitively. This meant that he became less conscious about calorie intake. Instead of eating for aesthetics, he started eating to fuel his workout. Come 2022, he now proudly boasts that he is sure he has a healthier relationship with food, with working out, and with people. 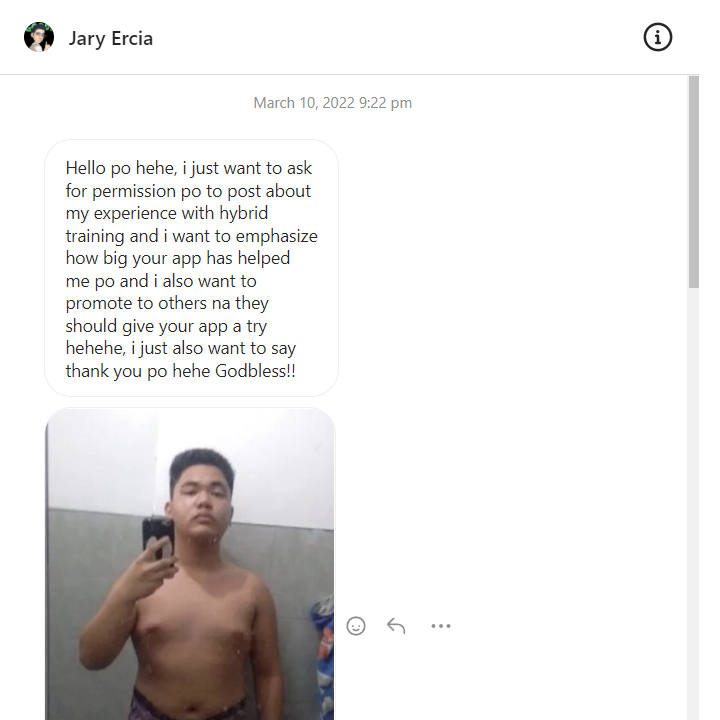 “Having a goal distance, like a virtual race, was definitely something to look forward to and the tracking through the app gives you a sense of accountability”

I asked him if the Pinoy Fitness app helped him in this journey. He admits that he was initially afraid of doing cardio workouts or running. But with his fitness coach, Jary learned balance and harmony in working out. Mid-2021, Jary discovered the Pinoy Fitness app and started joining the virtual challenges. He said that it helped make running both enjoyable and challenging to him. Every distance became a goal. The virtual runs helped him incorporate running to his routine easily. The distance goals per quarter helped him plan wisely and incorporate healthy cardiovascular exercises with his healthy strength training. “Having a goal distance, like a virtual race, was definitely something to look forward to and the tracking through the app gives you a sense of accountability,” Jary said. 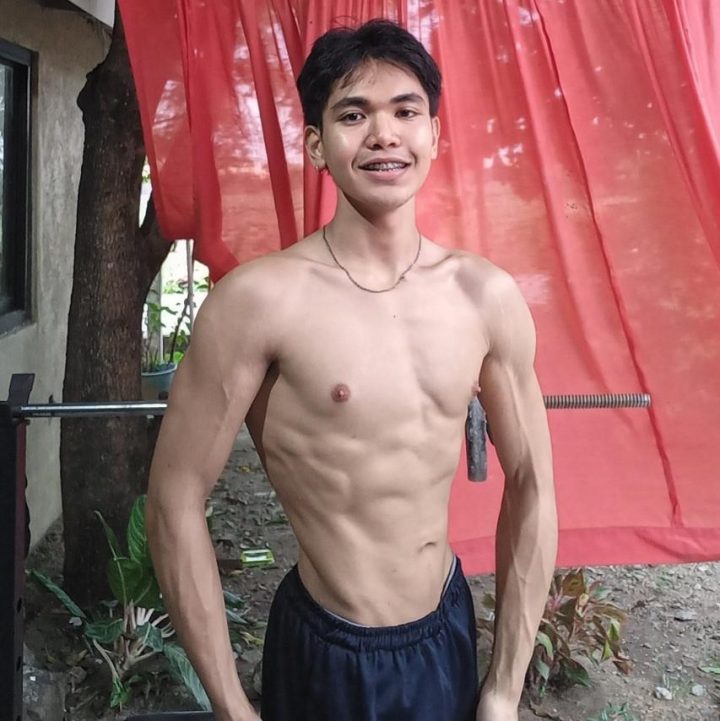 What are Jary’s most valuable lessons in his journey so far? He laughingly said “Mother knows best talaga! ‘Yung mga sinasabi ng parents natin, take them into account and see it as constructive criticism.” He continued also by saying that “We should be open to what our loved ones say, not to the point of letting it affect us but just be open to it.” He said that YouTube is not enough. It is still best to listen to your body and as much as possible talk to a professional.

“The more you learn, the more you need to learn.” Our learning and progress never stops. For those who want to lose weight, it’s never too late nor too early to start exercising. “Exercising in general should be a want not a need, do not wait until you’re obese like me before you start moving and making changes.” A healthy life means a healthy lifestyle and at some point we do need a professional to guide us. “Kahit gaano ka shaky ng progress, a smooth sea never made a great sailor.”

Through a fitness coach, Jary has maintained a healthy weight range of 130 to 135 lbs, where he does running and strength training. Through the Pinoy Fitness virtual races, he says that it keeps him going through his routine with the right balance of seriousness and enjoyment. You can download the Pinoy Fitness mobile app here – https://pinoy.fit/atleta

Angel Acosta to face Janel Rivera at 122 pounds, on May 12, on DAZN