Yordenis Ugas feels he can shock the world once more by beating Errol Spence Jr.

Ugas is used to it.

The WBA titlist and The Ring’s No. 3-ranked welterweight realizes not many, other than his surrounding crew, give him much of a chance this Saturday against WBC/IBF titlist and Ring’s No. 2-rated welterweight Errol “The Truth” Spence Jr. in their unification fight at AT&T Stadium in Arlington, Texas, on Showtime Pay-Per-View (9 p.m. ET/6 p.m. PT).

The 32-year-old Spence (27-0, 21 knockouts) supposedly has the superior handspeed, footwork, jab, defense, power, and skill set—and the homefield advantage, fighting in his home state of Texas, at AT&T Stadium, home of the NFL’s Dallas Cowboys, for the third time in three years.

What Ugas (27-4, 12 KOs) has is a confidence-empowering, career-altering victory over the legendary Manny Pacquiao last August—a fight the Cuban expatriate was supposed to lose, too. 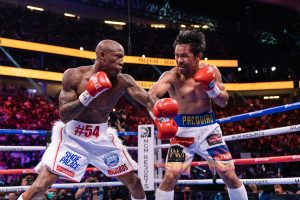 “I have been in plenty of situations plenty of times before like this where I’m the (underdog), Pacquiao being the most recent one, but at the same time, I know how to handle it and I can bring this fight along like I have before,” said Ugas through an interpreter in an exclusive with Ring. “I gained confidence after the Pacquiao win, I gained faith, and I knew once I stepped into the ring with Pacquiao, good things were going to happen. I have the same feeling good things will come my way when I get in the ring with Spence.

“Spence has an aggressive mentality where he’s always coming forward. He’s thinking of doing damage 100 percent of the time. I know how to deal with that. I know I am a better fighter than I was before the Pacquiao fight. I am filled with a lot more confidence. I have some new things to showcase because that’s the way I do things. Errol Spence is a very tough opponent, and I know that I’m going to have to be ready for anything he does.”

Ugas, 35, and Spence faced a common opponent, the now-retired Shawn Porter. “Showtime” beat Ugas in March 2019 by split-decision. But Ugas gave Porter problems, and many at ringside thought Ugas did enough to win, which manifested itself in Porter’s missed wild swings at the slick, defense-minded Cuban. Ugas cut Porter on the right eye in the 10th, and his precision punching was cause for judge Zachary Young to score it widely 117-111 for Ugas, against the 116-112 Steve Morrow scorecard and Max DeLuca’s 115-113 tally for Porter.

“I will shock the world again because I’m an experienced fighter that has history to back me up. I believe in my skills to shock the world once again. It helps knowing that I am a champion, I am a warrior who answers the bell to the toughest challenges. I’m ready for anything that comes my way. I’ve been fighting for my life ever since I was six years old. I started winning championships since I was 10. So, this is nothing new.”

Joseph Santoliquito is an award-winning sportswriter who has been working for Ring Magazine/RingTV.com since October 1997 and is the president of the Boxing Writers Association of America. He can be followed on twitter @JSantoliquito.