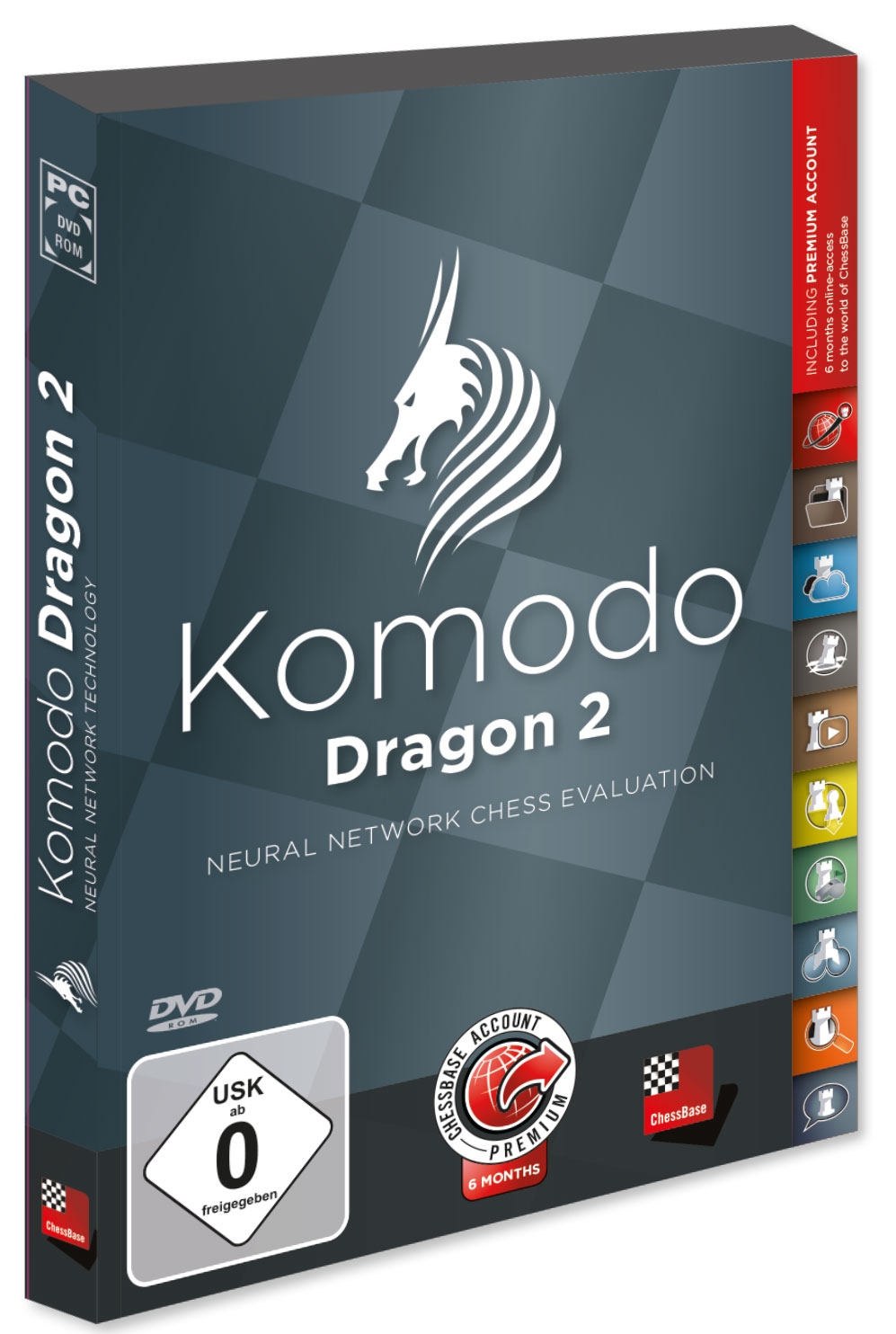 After Komodo 14 programmers GM Larry Kaufman and Mark Lefler recently decided to start over from scratch. The step from the classic engine to the new “Dragon”, which, like Fat Fritz 2.0, draws its strength from a combination of a high-performance engine with a neural network, is quite fundamental.

The network of Komodo Dragon 2 was trained with the help of countless ultra-fast games of the classic Komodo14, which for a long time was the world’s strongest engine for games with such short thinking times.

Komodo Dragon 2 thus has both excellent positional play – thanks to the neural network – and tremendous tactical power and computing speed, thanks to the classic Alpha Beta engine.

It is a combination that pays off: compared to the double world champion Komodo 14, the developers were thus able to increase the playing strength of Komodo Dragon 2 once again by more than 200 Elo points! The first version of the “Dragon” is currently already one of the top three in the CCRL rating list (as of April 2021). However, the search function was still largely based on the settings of the old Komodo 14 engine. This has changed with “Dragon 2”: in the new version, the search has been optimised based on evaluations stored in the neural network. It will be interesting to see whether Dragon can even outperform the competition as a result!

Komodo Dragon 2 comes with two evaluations. The standard search with the NNUE evaluation offers maximum playing strength.  You can also have Komodo Dragon use the regular  evaluation with personalities like “Attack”, “Beginner”, “Defence”, “Endgame”, both during analysis and in playing games. Skill levels can be set to adjust the NNUE or Regular Evaluation modes to your strength. Combine them as you wish to make many interesting opponents.

For analysis with multiple variations, the “MCTS” (“Monte-Carlo Tree Search”) is recommended. This search mode offers an exciting feature: you can have the move that offers the best chances from a practical point of view displayed in the analysis. The standard version, on the other hand, always expects the best possible play from the opponent, and that is therefore clearly the first choice, especially in correspondence chess.

Here’s an description of different preferences and styles of play in different modes, provided to us by GM Larry Kaufman:

So at least in the opening position, MCTS was much more in agreement with master practice and much more stable in its evaluations. The standard version will normally spot tactics more quickly than MCTS, but in non-tactical positions its scores will swing much more wildly as it discovers very deep subtleties that no human would ever calculate at the board. It will generally score better against other engines which are also looking extremely deeply.

Includes the current Fritz 17 program interface and six months ChessBase Premium Account. That gives you mobile access to an exciting range of web-based applications from ChessBase, on your PC or tablet (iPad, Android, iMac etc.) – all you need is an up-to-date browser (Chrome, Safari) and an internet connection!

GM Larry Kaufman: The best move is not always the best 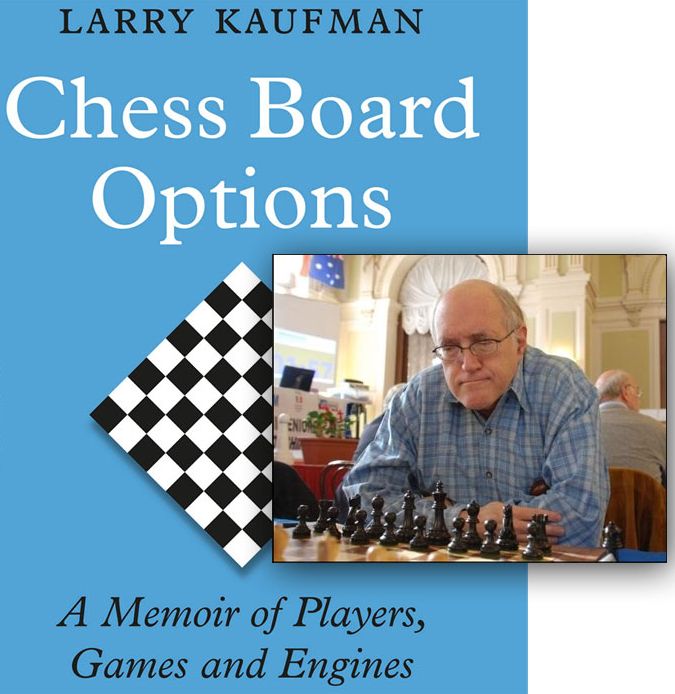 We spoke with Larry, who has been, in his own words, “involved with computer chess for a century now (if you round 54 years to the nearest century).” He tells us that “in standard chess we are even with Stockfish 13 if both are set to look at the five best lines of play.

We asked Larry Kaufman, who is one of the two authors of the Komodo project, to illustrate how MCTS worked.  He chose an unusual example: a handicap game with which the team had been experimenting (you need to give humans a chance).

The Komodo Dragon MCTS mode is especially suitable for posing problems for human opponents who are not using engines. This has been repeatedly demonstrated in both official and private testing against IM and GM human opponents. Since any top engine will score nearly 100% against even the best human grandmasters nowadays in standard chess, the only way to measure or test top engines against unaided humans is by handicap play.

We have run many matches in which both standard and MCTS mode play against the same strong human opponent at the same handicaps and time limits. MCTS mode usually scores better, sometimes much better, and at worse scores the same. To give two examples: from Rapid (15′ + 10″) matches, against Hikaru Nakamura (probably the world’s second best online Rapid player), giving two pawns handicap (b2 or c2 plus f2 or g2), standard mode scored three draws and one win, while MCTS won all four games. Against GM Alex Lenderman, giving knight for pawn, knight for castling rights, or full knight odds just in chess960, standard mode lost three games and only made one draw, while MCTS mode actually came out one game ahead out of twelve games.

But when Dragon gives handicaps to other engines with ratings in the GM range, we see the opposite: standard mode scores better than MCTS. It’s important to set problems for human opponents in bad or losing positions, but it doesn’t seem to work well against engines, it’s better just to play proper chess against them. Standard mode doesn’t care if it is forcing you to make the best moves, while MCTS tries to avoid doing so when it’s a close choice.

The most frequent cases where you should play an objectively inferior move to give the opponent chances to go wrong arise when you are in trouble or losing. A simple example of this can be seen in the traditional “pawn and two move” handicap, where after 1.e4 and 2.Nc3 (with f7 missing) Komodo Dragon MCTS wants to gambit a second pawn with 2…c5!? while standard mode prefers the “correct” 2…d6 or 2…Nh6. Here some details:

In general, standard mode is best when the position is good. There is no need to assume that the opponent will play worse than Dragon; if it just plays the objectively best moves it can play for the win with minimal risk. But if the position is bad or especially if it is losing, practical chances are maximized by assuming that the opponent will play worse than we will; otherwise he’ll probably win. We shouldn’t automatically expect him to see everything we see. This is where MCTS shines.

Let us take the traditional handicap of “pawn and two moves”, where Black removes the f7 pawn, White plays 1.e4, and White is still on move.

Now Black is losing objectively, but he clearly shouldn’t resign, given that no GM has ever beat Komodo at this handicap in a public game, in many tries. Standard Komodo Dragon 2 likes 2…Nh6 or 2…d6 (after 2.Nc3). They are probably the two best moves objectively. But the MCTS version likes the gambit move 2…c5!?, allowing White to win the pawn by 3.Qh5+, at some cost to development, as the queen loses tempi returning to safety. If White doesn’t grab the pawn, then 2…c5 is probably the best move, to prevent the big center after 3.d4, and if he does grab it he will have to play very precisely to keep the second pawn without getting into difficulties.

This is typical of MCTS, choosing a move in a bad position that will prove to be best against most sensible lines of play by the opponent even if it is slightly inferior against perfect play. This explains why the MCTS mode of Komodo (both Dragon and pre-Dragon) has scored noticeably better than the standard mode in handicap games with grandmasters. To put it another way, if you are likely to lose with routine play, isn’t it sensible to offer a gambit that give significant but not quite full compensation for the pawn?

Attached are two recent Komodo Dragon wins against strong engines, lightly annotated. The first features an Exchange sacrifice, the second a pawn sacrifice, both of which might be difficult for a human GM to play as the material is not recovered so quickly.

Height to health: Monitoring your child’s growth for better development