Penrose’s spectacular win against Tal was the first time in 61 years that an English player defeated a reigning World Champion. The last time this had happened was in 1899, when Joseph Henry Blackburne won against Emanuel Lasker. Penrose’s victory against Tal was also the only game the dominating Soviet team lost at the Olympiad in Leipzig.

When preparing for his game against Tal, Penrose came across a game, in which the Finnish player Kaarle Ojanen defeated Paul Keres with a dangerous in the Benoni. Penrose adapted Ojanen’s idea and that helped him to beat Tal.

Ding Liren confirmed to play in the Candidates

Game of the Week #516: A fine attack by Nico Zwirs 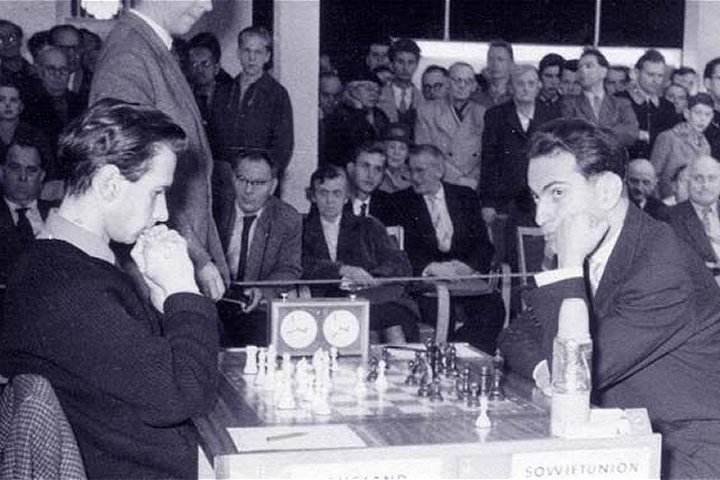 When Penrose entered the dining room in the evening after the game, the players gathered there greeted him with standing ovations. The following day, several British newspapers reported about this historic victory on their front pages.

The Chess Olympiad in Leipzig was perhaps Penrose’s “tournament of a lifetime”. He also won against former world champion Max Euwe and had a winning position against Bobby Fischer. But as he was in time trouble, Penrose did not want to risk too much and offered a draw. Fischer accepted and then showed Penrose the winning idea.

Penrose was an excellent player, but remained an amateur throughout his life. Born in Colchester on 7 October 1933, he came from a family of academics who were all very successful in their respective fields. Chess also played a great role in this family, and of the family members, Jonathan Penrose proved to be the most talented at chess. He was a very promising junior player but after leaving school he concentrated on his psychology studies and later became a lecturer at Middlesex University.

In 1958 Penrose won the British Championship for the first time, and he repeated this success in the next five British Championships. Between 1966 and 1969 he won the title another four times. Penrose played in several Olympiads for the English team, and at the Chess Olympiad 1968 in Lugano he won silver for the second best performance on board one – behind World Champion Tigran Petrosian – and did not lose a single game in the event.

In 1970 Penrose fainted during games in two tournaments, the second time at the 1970 Chess Olympiad in Siegen, and this caused him to take a break from tournament chess. At the end of the 1970s Penrose finally retired from tournament chess, but he continued to play correspondence chess successfully. In 1971 he was awarded the OBE for his services to chess, in 1983 he became a Grandmaster of Correspondence Chess, and in 1993 the FIDE made him an Honorary Grandmaster.

Meet the Artists Behind the Drawings in ‘Our Beloved Summer’