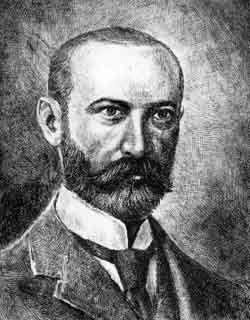 … was born 161 years ago in Tata, Hungary. He was educated in Hungary and Austria, where he received a diploma in mechanical engineering at the Technical University of Vienna (in 1882). At the age of 21 he started working for the Hungarian Railway.

Blatny knew nothing about electrotechnics from his university studies, but he became interested and educated himself auto-didactically on the subject. He went on to make a number of groundbreaking inventions, like the modern electric transformer, tension regulators, motor capacitors, turbo generators, the AC watt-meter. In fact it was he that came up with the name “transformer.” One could say his inventions changed the world.

So Otto Blathy was a remarkably talented man, a great electrical inventor. But he also had a hobby: he was a well known author of chess problems. But not just any mate-in-two or three problems. Otto Titzusz specialized in long-movers and grotesque chess problems.

“Grotesque problems” start with a highly unlikely position, usually one in which White has a very small number of pieces, and is asked to win against much larger black forces. These problems are generally intended to be humorous.

One of the first “Blathy Grotesques” I encountered, so many years ago, is one of his most famous. I will show it to you in an interactive diagram, where you can move the pieces. In fact an engine will play countermoves for Black. See if you can mate or defeat it.

As you can see almost all the black pieces are locked: only the knight on e1 can move, and the queen between a2 and a1. The first move is clear: White must capture the knight. Any other move would allow the knight to move and the e-pawn to promote, freeing the black pieces, which will go on to deliver mate.

So 1.Kxe1 it is, after which Black only has Qa1, and after that only Qa1-a2-a1… White can promote his pawn. But to what? If he promotes it to a queen, how could he deliver mate? Maybe capture the c4-pawn, and then the b3-rook (with the black queen on a1). But how should that lead to mate? 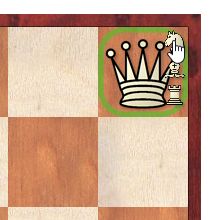 But then we have an idea: white should promote to a knight, which then captures the c4-pawn, after which it can deliver mate by capturing the rook on b3. That’s it!

You may not be familiar with underpromotion on the board above. Actually it is quite simple: if you look carefully, when you hover with the pawn on h8 the board will offer you the choice of Q, R, B or N. Move the cursor so that it is on the knight and let go. Bingo, you have a knight. And you can get to work mating the black king

But there is still a small problem to resolve. You will see it when you try to execute mate. If you play your moves correctly it is easy to mate, but if you overlook a subtlety you will not succeed. I will not be giving the full solution yet, so you are going to have to find it on your own.

This problem enchanted me, when I first saw it. I was full of wonder how someone could come up with such an idea, so flawlessly executed. Could happen only once in a lifetime, right? But then I discovered that this man, Ottó Titusz hats-off Bláthy, has composed dozens and dozens of Grotesques, each as unexpected and funny as the other. I will show you a couple more I have known for decades. Hopefully it will brighten up your day.

How can the sole knight checkmate the enemy king, which is surrounded by the entire black force? Once again I have enabled the engine in the diagram, so it will defend against your moves. You must play the one accurate line that leads to a win. The engine will stop playing when you finally mate the black king. At least try to guess on which square the knight will end. You have to admit: it is most entertaining.

Here’s another one that is especially dear to me. I actually solve it when I was in my early twenties, all by myself – no Internet to google things then.

It seemed clear to me: the white king moves down the first rank, and then into the open, via g1-g2-f3, to attack the black pawns. All the while the black king must stay on c8. Any move would doom him: after …Kd7 (or …Kd8) White plays b7 followed by b8Q, winning. However, the black bishop follows the king and causes no end of problems. I always found a refutation to any winning attempts. There were no chess engines at the time to suggest alternatives. Try as I might, I could not find a convincing win.

But then I had an idea: what if it were Black to move in the initial position? Then he would be doomed: after 1…Bb2+ 2.Kb1! Black can either give up his bishop, or be forced to move his king, which allows White to promote: 2…Kd7 3.b7 and 3.b8Q. So could I somehow get to the diagram position with Black to move? And to my great pride I found it – as you, dear reader, will doubtlessly do as well, after all these hints. The win can be executed on the diagram against the engine, which will also defend tenaciously if you go astray.

There are many other Grotesques by Blathy that I could present – the man had an incredibly fertile mind for this kind of problem.

Here’s the deal: you try to solve the above three problems on the diagram boards, overcoming the resistance of the built-in engine, and congratulate yourself if you succeed. Please do not post solutions in the feedback section – only telling us if you did or did not solve the problems, and what you thought of them. Then, after a few day I will move this article to the top of the news page again (“feature” it), and add the solutions here for you to replay.

The five best books of 2021, according to Asia’s richest man