Abhimanyu eight points from the title


The Vezerkepzo GM tournament was held from May 13 to 21 in Budapest, Hungary. Taking part was 12-year-old Abhimanyu Mishra, on a quest to become the youngest grandmaster in history. Abhi was rated 2478 on live ratings and had two GM norms already. He needs the third norm – together with a total of 22 rating points – to receive the title. This was his next opportunity.

The tournament started well enough, with Abhimanyu dutifully winning his first game. In the second round he faced GM Gabor Nagy, rated 2518. Adhi had black and went for the Queen’s Gambit Declined without Nc3. After 25 moves the following position arose:

After playing his 25th move GM Nagy offered his youthful opponent a draw – which the latter refused! And that in spite of being low on time. He played 25…Bd7, and the game continued 26.Rc3 Kf7 27.a4 Rh6 28.a5

After this game a Very Strong Player (who doesn’t wish to be named) called me and said: “Okay, he is really an unusual talent, Fred. You keep an eye on him.” But hadn’t he just lost? “Surely you noticed his determination and his will to win,” my VSP friend said. “He finds it very hard to concede a draw, even if his opponent is a grandmaster.”

It was a tough break for the boy, who had not lost in a dozen previous games. He steadied himself in the next two round by drawing GM Vojtech Plat, rated 2556, and FM Manish Anto Cristiano, 2340. In round four he faced IM Julien Song, 2321, with the black pieces. “Abhi planned a new opening surprise,” his dad told me, “because he wanted to avoid a draw and push for a win. That backfired because he was not completely prepared in the opening line which was played in the game.” He got a hopeless position, but fought for hours trying to save it – unsuccessfully. It was his second loss in the tournament.

So was he devastated? No, Abhi came back to win his next four games, back to back, which gained him nine Elo points, taking his live rating to 2487. Here are all his games from the tournament:

And here the final standings. 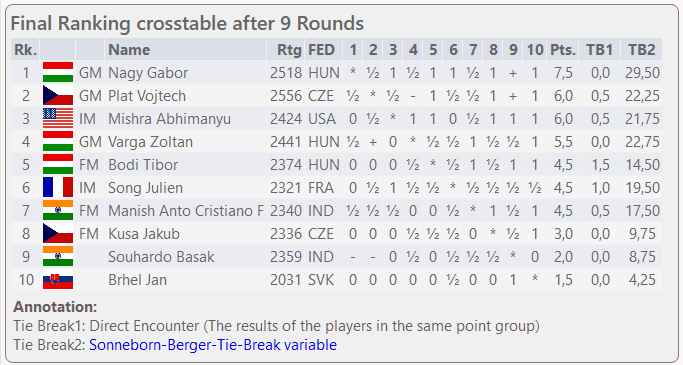 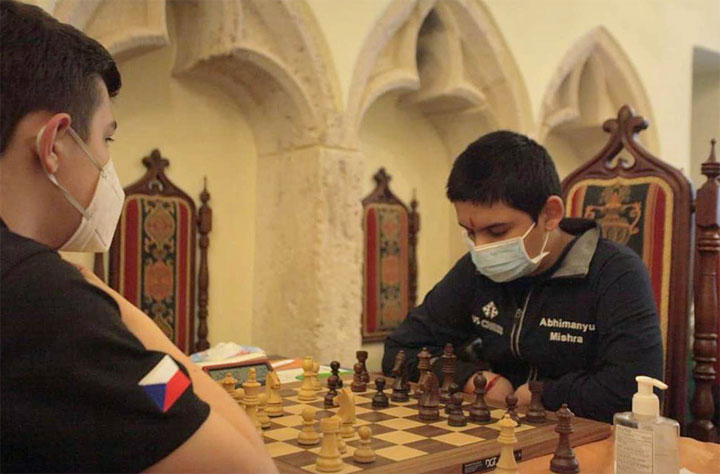 After our previous reports on Abhimanyu Mishra’s quest to become the youngest grandmaster in history – “Will he break the world record?” and “Second GM norm for Abhimanyu” – we received as large number or messages, from amateurs, but also from some pretty well-known personalities. We want to share the latter with you:

GM Wesley So, currently world number 9:
Greetings and congratulations Abhimanyu Mishra! I wish you all the best for your future and present, contributions to the great game of chess.

GM Yasser Seirawan,  four-time United States champion:
Dear Abhimanyu, I’m following your successes closely and I’m hoping to welcome you into the grandmaster ranks as the youngest ever. All of America is proud of your many achievements already.  Wishing you the best from very bests! Yasser”

GM Dr Karsten Müller, leading endgame expert:
There is a saying that against young players you just have to exchange into an endgame, and it will win itself. But not so against Abhimanyu. Abhi, you really have a remarkable endgame technique for such a young player. It will help you to go a long way upwards, just like Magnus Carlsen. Opening knowledge and attacking prowess win games, but endgame technique and defence win World Championships.

GM Irina Krush, multiple US Women’s Champion:
Congrats, Abi! Glad to see all your hard work bearing fruit. I am sure you will meet your goal, but I wanted to wish you good luck anyway 🙂

GM Anna Muzychuk, Ukraine:
Hello Abhimanyu! Congrats on achieving two GM norms! That’s impressive. I have seen some of your games, and an article about you written by Sagar Shah on ChessBase. I know that now you are fully concentrated on fulfilling your last norm and becoming the youngest GM in the history of chess. And I wish you manage to do this. But don’t become obsessed with this thought. Enjoy your training and games, and consider this GM title just as one of the steps on your way to the very top. Good luck, Abhi!

WGM/IM Eva Repkova, Chairperson of the FIDE Commission for Women’s Chess:
Abhimanyu, congratulations on your incredible chess achievements! Your parents, family and friends must be very proud of you! Please always remember that your star is shining bright not only thanks to your unique talent and hard work but also thanks to their support and sacrifice. I wish your chess results will get better and better from now on and you reach the very top one day. May you become the biggest warrior on the chessboard, ruthless and fearless, but gentle and full of compassion in real life and in your heart! Best wishes. Eva.

GM Zhu Chen,  former Women’s World Champion:
Abhimanyu, you achieved the world youngest IM title record at the age of 10 years, 9 months and 3 days, and now you are on the way to score the last GM norm at the age of 12. This is absolutely fascinating! Your hard work and dedication proves to many young players that “all dreams are possible!” I wish you a very bright future!

GM Xu Yuhua, former Women’s World Champion:
​Hi Abhimanyu, to get two GM norms at the age of twelve is really not an easy thing. I’m happy for you! Chess is an interesting game and I believe you have found its secret entrance. I hope you enjoy the games, continue to work hard and in the future you will become a top international grandmaster!

GM Nihal Sarin, 16, top Indian chess prodigy:
Congratulations Abhimanyu! All the best for your chess career. Try to enjoy every moment and have fun!

Gukesh Dommaraju, second youngest grandmaster in history:
I have seen some of Abhi’s games and obviously he is very strong. Congrats. I wish him all the best in breaking the record!

Arjun Srinivas, 20, Indian talent:
“Hi Abhimanyu, I have been following your journey closely and your games are an absolute delight to look at! It’s wonderful to see you chasing the grandmaster title at such a young age, and I wish you all the very best for the title. I’ll be keeping track of your journey. We believe in you!! :)”

Prof Ken Rogoff, renowned economist and chess grandmaster:
Abhimanyu, congratulations on your extraordinary achievement, and best of luck in every part of your life in the future.

Kailasanathan Swaminathan, Chess Patron, Managing Director of Microsense Networks:
I am confident that Abhimanyu will break Karjakins long standing record of youngest grandmaster in history. We pray and look forward to the day.

Currently Abhi is playing in his next GM tournament. At the time of writing he is leading with 2½/3 points, and has a live rating of 2495. You can follow the tournament live here – and are welcome to post results in the feedback section below. If you can, with your fingers crossed.

Suns’ Paul out for 6-8 weeks with broken thumb